Self, Situation and Sustainability

“There is only one corner of the universe you can be

certain of improving, and that’s your own self”.

During my growing years, my source of fun was playing games, chatting with friends, or reading books. I was serious only during short periods like the final exams, so that I would get good marks. I have never been competitive – be it in academics, or profession / business, because I found it negative. This understanding also helped me to be peaceful. However, I was always conscious about the situation in which I was placed and my duties.

Immediately after I completed engineering (1973), I applied for higher studies at the Indian Institute of Science (IISc) and a couple of US universities just like many of my classmates. I did not get a seat in IISc, but I got admission in the US universities. When I told my father about it, he innocently asked me, “If you go there and later marry a white lady, what will we do here? You should know that you have three younger siblings.” It really made me think. While I considered taking care of self as a fundamental duty, after my father’s innocent question, I understood that taking care of my immediate family members was another important duty.

In my early thirties I resigned from a stable job to move into the unstable entrepreneurial world, without much understanding some of the key elements – Market forces, rigid bureaucracy, Strategy, and Decision-making not necessarily based on logic. It took some time for me to understand that most of the businessmen (especially in the small-scale sector) were focussed on survival and on making money for themselves, rather than building an institution. I found it difficult to maintain growth, which is essential for sustainability of any enterprise, particularly because I did not want to compromise on ethics and values. I hence, decided to quit the companies that I co-founded.

Having been one of the founding members of an Export Consortium Company initiated by Consortium of Electronics Industries of Karnataka (CLIK) to promote export of products manufactured by small-scale electronics sector, I volunteered to manage the company pro-bono for a year (1993-94). The company was shaping up and stabilizing over a period of time, but there was problem in my family in the form of my only brother succumbing to cancer. By this time (1999), I had also committed to take over as President of the Rotary Club of which I have been a member since 1988. I informed my colleagues on the company’s board in April 2000 that I’d like to resign from the executive position in a year’s time. As I entered my fifties, I was convinced that helping out common man / children / young adults suffering from ignorance or poverty as another important duty.

The first thing I did after coming out of my businesses in 1993—before taking up the position of Executive Director, Clixport India Private Limited—was to establish Kaveri Trust (named after my paternal grandmother) to support education of under-privileged girl children. Every year Hema and I contribute a percentage of our income to the trust for this purpose. This has not stopped during the last twenty-six years. During end of 2009, my fellow Rotarian Jayaraman wished to establish a trust to promote eye donation and wanted to use the name Nayana Jyothi, which I had used for an eye-care project in 2006. He also requested me to be part of the trust. Having consented to be a trustee of Nayana Jyothi, I contributed a small amount as seed money to initiate the trust activities.

The transformation from a Research & Development engineer working for a public sector undertaking to an entrepreneur and then to an individual concerned about society has happened over a period of time (1984-2001), as I understood the main elements essential to manage life based on my experiences from being in various situations. I have depicted it below pictorially: 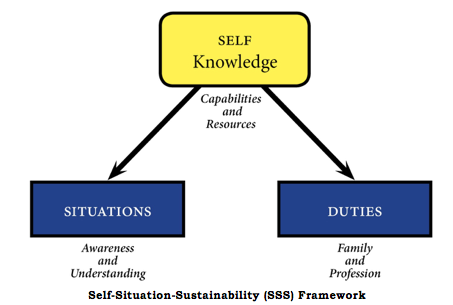 I was in my late thirties by the time I understood the three elements – Knowledge about self in terms of capabilities and resources, juxtaposed with the duties that I had to perform towards my profession and family depending on the situation.

During 1990s the industry scene was changing pretty fast due to globalization in terms of technology and competition. On the family front, hailing from a joint family system, I realised that I had to give time to meet the socio-cultural compulsions apart from taking care of growing needs of the family. After evaluating pros and cons I decided to come out of the ventures that I had cofounded. Again, in 2001, due to the fast-changing business scenario and my family situation, I had to come out of the consortium export company. During early 2002 I registered for Ph.d in the area of entrepreneurship development.

In 2008, the growing polyp in my right nostril was found to be malignant. I had to undergo another surgery for establishing negative region and went through the protocol treatment. Around the same time, the Bangalore Metro Project had demolished the acquired part of my ancestral home and we had moved to Malleswaram, closer to Hema’s college. In 2009, Hema had to undergo hysterectomy. With these changing situations, I had to further bring down pace of my activities. I shared my working time between mentoring youngsters and service projects that I was managing on the Rotary platform. I completed my doctoral thesis in 2009 and defended it in 2010. During early 2011 we shifted back to our ancestral home, now with a few more additions.

Owing to a major construction activity on our neighbouring site, we had to again shift for a short span of time (2013-15) to the house that Hema had built in 1999 on a plot of land her father had gifted her. In the latter half of 2014, Hema was diagnosed with breast cancer and underwent surgery as well as radiation and chemotherapy. In 2015 we moved back to our ancestral home and settled down. During all these years (2010-2018), I continued with my slow-paced mentoring activities and service projects.

Looking back, I find that my decision in 1993 to come out of business that was doing well was a wise one, because my family required me more than the business. Again in 2001, giving up my executive position of the consortium company that had stabilized well to register for a Ph.D was another wise decision, because I used my spare time for the service projects that have given me immense satisfaction. I found the simple SSS Framework that I had developed was handy in many situations.