“Travel makes one modest, you see what a tiny place you occupy in the world”  -Gustave Flaubert (1821–80)

The first travel that I recall is when I was around three years old. I had been with my mother to attend a wedding in a small village called Ukkalagere, where she was born. We went by bullock-cart from my maternal grandfather’s home in Sosale, another village located about thirty six kilometres from Mysore. I also recall the scene that I created when my elder sister went for a holiday to Mangalore with my paternal aunt leaving me behind when I was perhaps four years old. 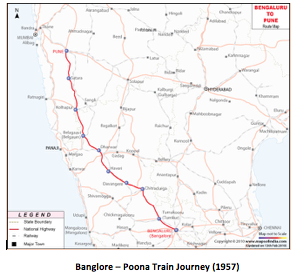 My first full-fledged travel by train was in 1957 from Bangalore to Poona along with my entire family (parents, three siblings and paternal grand-mother) when my father got transferred to a place called Khadakwasla about nineteen kilometers from Poona where the National Defence Academy (NDA) was under construction. At Tumkur, about seventy kilometers from Bangalore, my mother’s elder sister Jayamma and my maternal grandmother came to the railway station to meet us and gave us food as well as several goodies to take care of our requirements for the next thirty hours of journey.

Though I had travelled on several occasions during 1958–71 on short tours, it was during 1972 I undertook a major travel. As part of our industrial visit across India, I travelled to Madras, Calcutta, Chandigarh, Shimla, Delhi, and Bombay along with my Engineering classmates spread over three weeks. I stayed with my relatives at Calcutta and Delhi. In Delhi, while my classmates stayed at the Delhi Kannada School, I took a few clothes of mine leaving my suitcase with them and went to stay with my paternal aunt and uncle who were residing at the Institution of Engineers guest house. Even my cousin Jayashree was there with her one-year-old child, later joined by her brother Vijay who came from Gorakhpur, a small town in Uttar Pradesh. I had good time visiting my maternal uncles at Karol Bagh and West Kidwai Nagar as well as going around Asiad ’72, a big exhibition at Pragati Maidan. 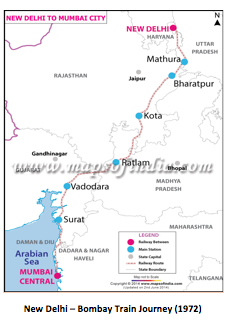 On the morning of the fourth day, I returned to Delhi Kannada School to join my classmates and proceed to Bombay as per the schedule. But to my shock, I was told that they had left the previous night. I was left with a duplicate copy of the round-trip ticket, a few souvenirs like a calendar and a diary that I had collected at the exhibition stalls, my unwashed clothes, and one hundred and fifty rupees.

After overcoming the initial shock, I went to the railway station to catch the next immediate train to Bombay. The unreserved compartment was so crowded that I couldn’t even enter. Just before the train started, I got into the guard’s compartment (which is not in existence these days), normally the last one. In my broken Hindi, I explained to the guard my predicament and requested him to allow me to travel. I gave him the calendar and the diary that I had collected in the exhibition stalls. Fortunately, he took pity on me and said that his ‘duty’ gets over at Ganganagar, his home town in Rajasthan, and it was up to his colleague who would take charge to consider further. When we reached Ganganagar around 1.30 PM, the guard who took charge did not oblige. Hence, the earlier guard asked me to go along with him to his house because the next train to Bombay was only later in the evening.

We walked to the guard’s house and his wife served us sumptuous lunch and the guard said he wanted to rest as he was having a severe headache. I was chatting for a while in my broken Hindi with his wife and waited for the guard to get up. He got up around five in the evening and escorted me to the station. He asked me to buy a ticket to Bombay, as the Travelling Ticket Examiner (TTE) would not accept the copy of the round-trip ticket as a valid one. As the train chugged into the station, he put me on to the unreserved compartment which was quite full. After a while I managed to squeeze between two people and tried to catch some sleep. I woke up some time in the night to realise that the train was not moving. The train had stopped near a place called Ratlam in Madhya Pradesh because a goods train had derailed and the track was occupied. After couple of hours, the train started and reached Bombay early in the morning.

As I came out of the station to take a bus to Sion and join my classmates at Bombay Tamil Sangam where we were supposed to stay, I was stopped by a person holding another person by his collar. He told me that he had caught him with a stolen gold biscuit which is worth few thousands. I said you can hand over him to the police. But he said as the police will take the gold and let the thief go, I can as well take that piece just for few hundreds. I told him I have just one hundred only. He asked me to give that as well as my watch (which was worth another hundred) and handed over the piece of gold!

Delighted, I got into a bus to Sion and reached Bombay Tamil Sangam around 7.30 AM to find that my classmates weren’t staying there; I learnt that they had come the previous afternoon and were sent to Bombay Telugu Sangam, which was a couple of kilometers away. Disappointed, I began walking towards my new destination when I saw a Kamat Hotel (a typical South Indian vegetarian restaurant) and decided to have breakfast as I was overcome by hunger. When I entered, to my sweet surprise, I found some of classmates eating Masala Dosa and was greatly relieved. Everyone eagerly listened to my adventures and had a good laugh. After visiting few industries in Bombay for the next two days, we skipped Hyderabad, as there was some agitation going on and returned to Bangalore.

The first thing I did after reaching Bangalore was to meet my Marwari friend who dealt with jewellery and showed him the piece of gold that I had got. He checked it and said that it was a piece of copper with some plating to make it look like gold! The tour report that I submitted subsequently received the Sir M Visvesvaraya Award for being the best, and a cheque of Rupees Two hundred and fifty was presented to me, which made good all my losses that I had incurred on the tour.

After completing my engineering (1973), I joined Indian Telephone Industries Limited (ITI) as Research and Development Engineer. I travelled to Baroda, Bombay, Calcutta, Delhi, Dhanbad, Madras, Patiala and several other smaller towns as part of work.  Sometime during end of 1978, I chanced upon an advertisement inviting applications for the post of Senior Project Manager from West Bengal State Electronics Development Corporation (WBSEDC). The company was offering first class train fare for the candidates called for interview. I thought I was a good fit for that position with my qualifications and experience and hence applied. As expected I got the interview call from WBSEDC. ITI had a perquisite for their employees – Leave Travel Concession (LTC); once in four years, an employee could avail this facility to travel with his family anywhere in India by train in first class. I thought, even if I was not selected, I will be utilizing the perquisite as well as collecting the first-class train fare from WBSEDC. This way I thought my holiday to Calcutta could be totally funded. 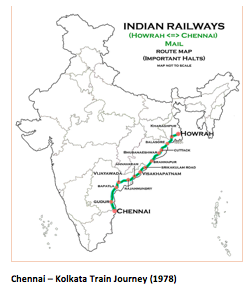 On the designated date, I travelled to Madras to take the Coramandel Express to Calcutta. My co-passenger happened to be the Chief Commercial Manager of Southern Railways and hence I had a royal treatment throughout the journey. As the train was nearing Bhuvaneshwar, it was terribly cloudy and by the time we reached Cuttack, it started pouring. The train managed to reach Kharaghpur with a delay of eight hours and the tracks were inundated with water up to nearly two feet. The train could not go further and had to return back to Madras. We had to shift to another train going to Calcutta. When I got into the assigned seat in the train, I found there were three more passengers more or less my age – one was a Captain from the EME regiment, another was a bank officer, and the third was an officer from Infantry. When we checked about the train’s departure, the Station Master told us that the train would not leave for at least the next 24 hours because of track dislocation. We decided to go out to Kharaghpur town for dinner. This went on for the next two days. We used to lock our part of the compartment and check with the station master about train’s departure before going out to town for a walk.

On the third day evening when we were returning from the town, we saw our train leaving the platform. We rushed to the Station master to complain as he had told us that the train will leave only the next day. He profusely apologised and said as Railway minister was visiting to inspect the station the next morning, they wanted to clear a few trains and ours was the first one. He suggested that we take the next train and he’d inform the next station master to break open the lock of our part of the compartment and take out all our items. When we reached the next station, Tata Nagar, the Station master had kept all our items including the two days’ newspapers intact. We rushed all our items into the compartment and managed to reach Calcutta next morning.

When I visited WBSEDC office at the appointed hour for the interview, the interviewing committee members were surprised how I could reach in time for the interview, in spite of cancellation of trains. I narrated my story of reaching Kharagpur couple of days back and the ordeal that I had to go through. They then asked me what made to apply for this job in a far away location, when I was well employed in a reputed Public Sector Company situated in my home town. I explained to them my aspirations of becoming a big man in a small company rather than remaining a small man in a big company. When I told them about my expectation of salary and perks, the Chairman of the company had a hearty laugh and said that even he was not receiving such compensation. He asked me to collect my train fare and enjoy rest of my stay in Calcutta. As I had already spent three days in Kharagpur station and was left with only two more days, I cancelled my train ticket and bought an Air ticket to Bangalore so that I could spend at least a couple of days in Calcutta. That happened to be my maiden air travel.

Travelling, for all its splendour, also entails hardship. And these hardships bring out skills, qualities and lessons that prove to be invaluable.

Self, Situation and Sustainability