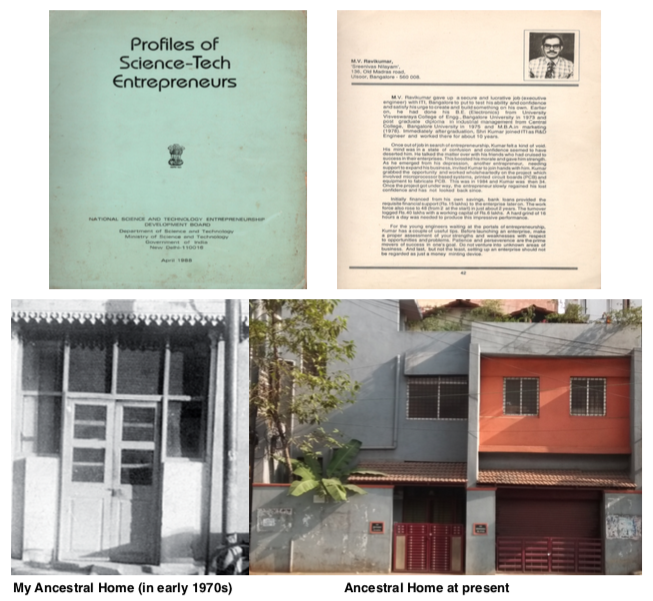 We achieve emotional balance when we allow ourselves to feel whatever we encounter, without getting stifled or being overwhelmed by it, and learn to accept our feelings without judgment. Most people try to avoid emotional and physical pain. Avoiding it doesn’t work because pain, emotional or physical, is an inevitable part of life, an essential aspect of being human.  As we grow, we naturally develop aspirations beyond mere survival requirements. Money is a requirement for fulfilling aspirations and hence Economics becomes another inevitable aspect of human life.

During most part of my childhood I focussed on the job on hand, be it academic work or playing a game of cricket, enjoying a movie or eating out with friends; I was driven more by the moment rather than analysing the process or the possible outcomes. This approach stood the test of time in various situations throughout my life.

The purpose of education, as I had understood in my younger days, was mainly to get a job in order that I could take care of my family. When I was in my tenth standard, as a Plan B, I enrolled into a typewriting institute, so that I could get the job of a typist if for some reason I couldn’t pursue my studies further. However, because I got the National Merit cum Means Scholarship based on my score in the SSLC Board examination and my father’s annual income, I was able to join a Pre-University Course and subsequently pursue an engineering degree. My knowledge of typing came in handy later when I began to use computers. ‘Whatever I learn, let me do it with focus’ got embedded in my belief system.

During my college years, I understood the need to set goals, mainly short and medium term ones; I realised the need to plan and to find the right resources to achieve the plans. This process strengthened during my Post-graduation years and subsequently helped me during the time when I decided to plunge into the world of entrepreneurship. My values and confidence in my knowledge and abilities were the driving forces throughout my career as an entrepreneur rather than business opportunities or creating wealth.

Having got myself promoted from being a part-time entrepreneur to a full-time director of a private limited company in 1984, I worked really hard and was short-listed as one of the fifty successful Science & Technology Entrepreneurs in India by the Department of Science and Technology, Government of India (1988). In 1989, my father’s death and a sudden setback in my wife’s health made me seriously look into family matters. I had to go back to the Value frame-work and the Need frame-work that I had developed; I pondered over them for a long time because our company had borrowed substantially from the bank and the State Finance Corporation to grow the business.

During the span of seven years since inception, the company had grown several folds with seventy-five employees, customers and suppliers spread across the country, and a gradually growing global presence. On average, I was travelling abroad two or three times a year apart from frequent domestic travels. During 1989-90, the Indian economy went through an extremely turbulent phase and subsequently was globalized sometime in mid-1991. I felt it would be a good opportunity for the company to go public so that I could take it to the next level as well as build the leadership pipeline. My founding partner did not like the idea and was of the view that there were too many compliance requirements of the government to be met and hence, as promoters we would lose flexibility.

Along with my growing business, I also ensured my ancestral home was modified to suit my family’s changing requirements. Our house is situated on the main road, so I had to get the modifications done in instalments. During the modification period (normally would take four or five months), I had to shift my parents to my elder sister’s house and my wife and children to my parents-in-law’s house. The children were just then admitted to a school that was four kilometres from home. In early 1993, my father-in-law was diagnosed with an enlarged heart and had to be hospitalized. At the same time, our younger son was diagnosed with some learning difficulty and that was affecting his interpersonal communication. In this backdrop, I had to make that tough decision – to come out of the companies that I had co-founded. It took almost a year to come out after I had initiated the process.

During the turbulent times of Indian economy (1989-91), I happened to be the President of Consortium of Electronics Industries of Karnataka (CLIK). I had the opportunity to meet many industrialists across the country as well as bureaucrats and politicians. This gave me some insight into the future of small and medium sized manufacturing enterprises (SMEs), especially those who are dependent on imported raw materials. It was becoming important to take exports seriously. When I came out of the companies that I had initially co-founded, I decided to a start a new company with the support of six fellow industrialists (as angel investors), whose companies products had export potential. Small Industries Development Bank of India (SIDBI), which was established around the time of globalization (c. 1990) with a view to support SMEs, came forward to support the idea of a Consortium Export Company with a grant and conditional loan. Thus, in 1994, began my new innings as the Executive Director  of CLIXPORT INDIA Pvt. Ltd. with the office on the first floor of our ancestral house. This way I managed home as well as office.

The business of Clixport progressed and in five years we cleared the loans taken from SIDBI and other lenders. A Memorandum of Understanding was signed up with an Australian company to represent Clixport in Australia. Around the same time (1999) my younger brother who was working in Pohnpei, Micronesia (associated with the United States) and also doing his doctoral research in the University of Florida, USA was diagnosed with stomach and oesophagus cancer. He was brought home and within few months succumbed to the disease in November 1999. This made me revisit my Needs frame-work and in April 2000, I informed Clixport’s board that I would like to resign in a year’s time.

I turned fifty with the birth of new millennium and decided to enrol for a Ph.D in memory of my departed brother and use my free time for social causes.

Routine and Rigour
Scroll to top