“Routinize the routine. Do things that are not important to you with the

least energy so that it leaves you with more energy for other things”. 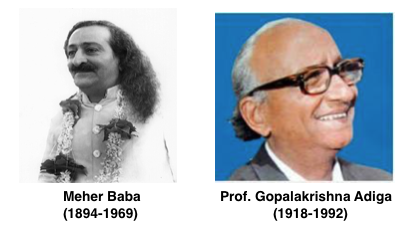 Like the adage ‘Practice makes a man perfect,’ we have generally been trained to follow some sort of routine – from the time we get up from bed until we go back to it. As we grow up, we follow a few of them but give up many, mostly due to lack of time or not finding value in them. In some sense, routine helps embed in the memory certain information, because of which an activity is done mechanically without applying intelligence, consequently one doesn’t derive fulfilment and satisfaction.

As the environment and circumstances were changing often during my early years (fifth to tenth), I got used to uncertainties. This considerably brought down my expectations. As a student of engineering (1968-73), to break the monotony of assignments, tests, and examinations, I used to volunteer my time to some activities that kindled my interest.

One such activity was volunteering my services for the Fifty-eighth Indian Science Congress that was hosted by Bangalore University during 3rd to 7th January 1971. I was assigned the responsibility of taking care of seventy delegates comprising mostly professors from various Indian universities and a few research scientists. The delegates were housed in the boys’ hostel of the St. Joseph’s Arts and Science College and I was allotted that premises. I was given the list of delegates and was informed that they would start arriving from the afternoon of 2nd January. That morning, I reported to the hostel warden, Br. Madtha, in order to get familiarised with the hostel, the staff, and the amenities available. I requested Br. Madtha to introduce me hostel staff who would be servicing the delegates – the cook, the house-keeping staff, and the room boys. After introducing myself, I explained to them about the conference and the guests who would be staying in the hostel so that they will be more serious about the task at hand. I informed them that I will be also staying there and will be one among them for the next six days to serve the guests and ensure their comfort.

As the delegates began arriving, I requested them to fill up a form to include their morning / night preferences of beverage and details of any specific ailments that they have, apart from other mechanical data. The next five days, I had a hectic time from five in the morning to as late as midnight. The university had given two buses for transporting the delegates to the conference venue (Central College Grounds) and my responsibility ended after they boarded the bus in the morning. It began again in the evening when they returned, until much after they all retired to bed. So I was busy from five to nine-thirty in the morning and again from five-thirty in the evening until midnight. In between, some of the delegates came back to their rooms and had some requirement or the other. I had to accompany couple of delegates to hospital some evenings because they fell sick.

One of the delegates, Prof. B. N. Banerjee from Calcutta, who was more than 80 years old, engaged me in long conversations during the nights, talking about his association with Thomas Alva Edison (1847–1931), the inventor of the incandescent lamp, among other things. 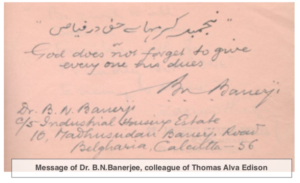 Even after the conference, he would regularly write letters to me until his last breath (which was informed to me by his son by means of a letter). There was another delegate, Dr. V. G. Kher, a professor of Physics from Nagpur University who was blind and a devotee of one Meher Baba. He used to narrate his spiritual experiences and wrote almost four pages in my autograph book about Meher Baba, when I requested for his advice to me. Thus, in a short span of five days, I had the opportunity to interact with senior professors and researchers. Age was no bar in making human connections. On the final day, I managed to get sixty-four of them write some advice (and/or testimonial) with their signatures in my autograph book.

Another activity for which I had volunteered during my engineering days was to support Prof. Gopalakrishna Adiga (1918–92), a well-known Kannada poet, in his election campaign during the 1972 general elections for the Bangalore parliamentary seat against Mr. Hanumanthaiah (1908–80), former Chief Minister of Karnataka. I worked almost sixteen hours a day for fifteen days, managing the election office that was established in my residential area. Unfortunately Prof. Adiga lost the election, but I gained a few friends and a lot of experience.

These voluntary activities required as much time and efforts or even more than what I was giving to my engineering examinations. Though I wasn’t specifically trained in such activities, having taken the initiative, I committed totally to the process, without worrying much about the results.

When I joined research and development department of Indian Telephone Industries Limited (ITI), initially I found the working system intriguing because I was used to freedom. Over a period of time, along with other members of my design team, I created a friendly ecosystem with our sub-staff and colleagues. It took considerable efforts for me to convince my seniors about my non-hierarchical approach because they believed in the top-down approach. During my years as an entrepreneur, I practiced simplicity and transparency in my management approach, which I found generally uncommon in the business community. I also realised over time that many people work out of fear or necessity of money, rather than duty or enjoyment.

We require rigour not just to achieve the set goals, but to derive fulfilment from our work. Rigour comes more from passion or responsibility and occasionally from training. Sometimes routine is a requirement for developing rigour, as disciplining oneself plays an important role in developing focus. Routine can also become frustrating, if the importance of rigour is not understood. However, too much of routine kills creative thinking and one must be conscious enough not to get into many fixed routines.

Options and Obsessions
Scroll to top