“It is not about proving anything to the world.
It is all about proving your capabilities to yourself and stretching your own boundaries.”
― Manoj Arora, Author of Dream On (2015)

Generally when we face failure or a situation that we don’t know how to handle, we worry about our capabilities. Sometimes, we develop capability just to meet the demands of the situation. From my younger years, I’ve had to bear additional responsibilities both at school and home, which I fortunately considered as part of my work and not as a burden. Till I entered high school, I was the class monitor and the school assembly in-charge; I also represented the school in several extra-curricular activities like debates and sports. On many occasions I got prizes and lavish praise from teachers. I also acted as the hero in dramas and happened to perform well in academics. Thus, expectations started rising within myself by the time I turned fourteen and had entered high-school.

On entering high-school, I preferred to sit in the last bench for two reasons – a) I was taller than the average teenager and b) I enjoyed the company of boys who were less academically inclined and more interested in movies, sports, and other activities typically aligned with adolescence. This influenced me to watch Tamil movies and play football and cricket. At home, my father and elder sister loved watching Tamil movies, so I accompanied them to the cinema. I was interested in the Armed Forces and so I joined the National Cadet Corps (NCC). I continued all this for almost three years (1964-66). However, as the tenth standard board examination was nearing, I realized that I should disconnect myself from the various extra-curricular activities and focus on academics. When the results were announced, I not only stood first in my class, but stood second for the school (there were six sections of sixty boys in each). This made me realize that if I was focussed, even for a short duration, I could get good results.

After joining Indian Telephone Industries Limited (ITI) as a Research and Development (R&D) engineer, I realised the importance of learning to deal with people at different levels in the hierarchy of the organisation. The content of our speech, hand gestures, and the decibel levels also have to be different, even if the objective of the communication may be the same. I observed that more importance was given to meetings and procedures rather than the actual job. I also realised that there was no extra credit given to an executive when he takes initiative or completes the job effectively in a given time. Hence, I started planning my exit from ITI to become an entrepreneur.

Though my exit was planned over couple of years, it was quite intimidating to work alone, having worked in a big R&D laboratory with a lot of support staff. It took some time for me to cope with the new situation. Later having found a business partner who had an ongoing manufacturing business and taking the responsibility of commercial functions, I quickly learnt the nuances of networking, dealing with customers, and liaising with financial institutions. As the business started growing, my travels, both domestic and international increased. In the second half of 1980s, with the limited infrastructure of air, railways and road that India had, I learnt to cope with uncertainties associated not just with travel, but various bureaucratic processes while dealing with various government departments and financial institutions.

As part of networking, I became member of several industry associations and chambers of commerce. Over a period, I took up Office-bearer positions (Managing Committee Member, Editor of house magazine, Secretary and President) in these associations and got exposed to political undercurrents that exist. Having grown up with strong values, I couldn’t understand these undercurrents for some time and it was telling upon my personal health as well as relationship with my business partner. Around this time (1989-1991), I had series of setbacks in my family too. This made me introspect on my capabilities not only in managing a growing business, but also managing the joint-family that I was heading, after the demise of my father. I decided to come out of my ongoing businesses and start afresh in my life.

Having come out of my business by April 1993, it took some time for me to cope with new arrangements. But this time I could manage better than how I fared during 1984 when I came out of ITI. I decided to take up the responsibility of managing the Consortium Export Company that a few members of the Consortium of Electronics Industries of Karnataka (CLIK) had promoted in 1992, to promote exports of products from Small and Medium Enterprises (SMEs) from Karnataka to the neighbouring countries. 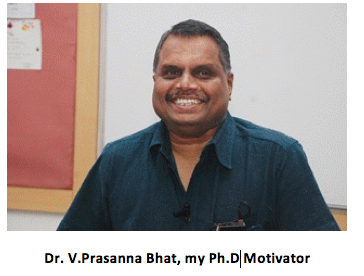 While I was managing the consortium export company, my post-graduation classmate and a good friend, who had done his Ph.D in finance immediately after MBA, suggested that I take up Ph.D and even wrote a brief synopsis of the research proposal. I had never considered research as my cup of tea. My younger brother who had registered for a part-time Ph.D in the US suddenly succumbed to stomach cancer in 1999. It is then that I seriously considered doing a Ph.D. By the time our family could recover from the shock of my brother’s death, my brother-in-law (elder sister’s husband) was diagnosed with cancer. Around the same time, I had committed to take up the leadership of the Rotary Club in which I was member since 1988. Two of the board members were quite keen to take over reins of the export company. So in April 2001, I relinquished responsibility of managing the company. With this, I decided not to venture into initiating another business again.

In January 2002 I registered for Ph.D with Bangalore University as an external Research Scholar and entered another area: Academic Research. I have thus been a learner on a continuous basis during most of my adulthood. Over a period, I realised that if I want to be happy, it is important to learn to cope with situations that I come across in life. This needed learning certain capabilities in terms of knowledge and skill to get the desired results. This also demands sincerity and commitment to the job, whether taken up for livelihood or satisfaction.

Resources and Relationships
Scroll to top