“Innovation, an instrument specific to entrepreneurship,

endows resources with a new capacity to create wealth”.

Until the age of sixteen, I never considered time, knowledge, or skills as resource. Born and brought up in a joint family environment, I always thought that the biggest resource I had was relatives. During my younger days, I could easily list the names of over a hundred relatives (paternal and maternal) with whom I was fairly familiar, although I could take liberty only with a few. I always received support from my immediate and extended family directly or indirectly. It is only when I received my first National Merit Scholarship of six hundred rupees in 1967 that I understood the importance of money as a resource and the associated freedom. All through my growing years I wasn’t greatly motivated by money; what pushed me more was to experiment with my life by doing something different from what my family elders were doing. 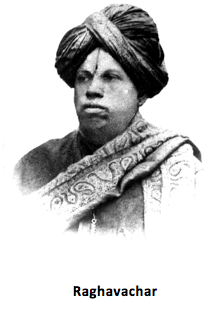 My paternal great grandfather Raghavachar, after his Sixth Form (today’s tenth standard equivalent) apparently migrated from a village called Maduravaasal in Chengalput district of Tamil Nadu to Bangalore some time during the early 1870s to seek employment. He got a job in Bangalore City Corporation (BCC) as a clerk with a salary of thirty rupees a month. The BCC office was situated in today’s Mayo Hall on M G Road. He hired a house in Ulsoor, the closest residential area to the office so that he could walk to office; the monthly rent was eight rupees. After a few years, when he had saved enough money to buy a house of his own, he came to know that one Kistnappa living on Old Madras Road (now Swami Vivekananda Road), a major arterial road, was desperate to sell his house built on a site measuring 120 feet by 40 feet. Raghavachar negotiated with Kistnappa and settled for a sum of eight hundred rupees to buy his house along with a few Tanjore paintings and some  artefacts in 1877. 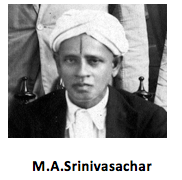 Of the two sons of Raghavachar, the elder one, M A Srinivasachar (my paternal grandfather) completed his Intermediate (equivalent of today’s Pre-University Course) in 1899 and took up a job as an Accountant with Mysore Government Insurance Department (MGID), whose office was situated in Cubbon Park. At the time of his retirement in 1935, he demolished the old house with a bamboo thatched roof to build a six bed-room house with Madras Terrace roof in the front portion and tiled roof at the back.

My father Venkatesan (1916–89), the only son of Srinivasachar, completed with some difficulty his Sixth Form (today’s tenth standard) and got a job as Fitter with Military Engineering Services (MES). He continued to live in the ancestral home with his family. Thus, all the three generations above me had worked till their retirement age in their respective jobs and lived in the house where I am currently living.  I have heard from my grandmother and mother that my ancestral home was always full with family members and guests (mostly relatives and sometime family friends) almost till the early seventies. Thus, I had considered my ancestral home and my relatives as the biggest resources that I had and it was my responsibility to preserve it and build it further.

Quite a few boys from my school and neighbourhood were my friends, with whom I would play and chat, but I never considered any one as particularly close to me. This continued even in my engineering days. After joining Indian Telephone Industries Limited (ITI), I developed a flair to network with people from other departments, which helped me in my later years as an entrepreneur.

The first enterprise that I initiated was in 1976 – Integrated Consumer Services (ICS) which provided services like making reservation for cinemas and railway tickets. My primary customer base comprised my colleagues from ITI. I procured tea from my cousin’s estate in Coonoor and made 500g and 1kg packets and sold them to my relatives and friends with a certain profit margin. As soon as I had the opportunity to establish an Electronics enterprise in 1979 based on my qualifications and experience, I wound up ICS, as it was not a great money-spinner for the human efforts that were deployed. With my changing revenue models almost every eight to nine years, owing to personal and family situations, I had to develop a new network every time, apart from the established ones. Since 2002, having registered for a Ph.D programme, I networked with academicians and researchers, which was totally a different experience. However, I had always learnt something new from each of my networks.

One common thread in all my experiments or explorations was that I consciously maintained my personal values – sincerity, honesty, integrity, and giving my best to whatever job that I undertook. I also tried to induce a certain amount of innovation to the product or process that was being offered. These traits helped me while developing Community Service Projects under the aegis of Rotary International in the last sixteen years.

Aristotle talks of three motives as the basis of friendship – utility, pleasure, and goodness. Friendship for utility is for mutual gain. As it is not particularly emotional, it could be with many people. In today’s context it is called network and ceases when there is no gain. Friendship for pleasure is more emotional and it is primarily to experience feel-good factor. It depends on what is considered as feel-good and dissolves once we outgrow such pleasure, which is momentary. The perfect friendship is perhaps based on the similarity being goodness. I experience this through the various service projects that I’m able to implement for the good of the society in general and poor people in particular, with the support of Rotary International as well as my friends from India and abroad.

As large and/or joint families have become a thing of the past, people have turned to technology for solidarity. Relationship needs reciprocation, not just sharing data or information; relationships evolve through emotional engagements. This calls for not only extra efforts and understanding, but an element of empathy and compassion.