“There are no foreign lands. It is the traveller only who is foreign”

In March 1983, Hema and I attended her cousin Mala’s wedding in Madras. Anuradha, Mala’s younger sister, who was doing her post-graduation at the Delhi School of Economics, received admission for Ph.D in Brown University, Providence, Rhode Island. Hema’s uncle Rangarajan was employed with the International Civil Aviation Organisation (ICAO) and was based out of Bangkok. Anu suggested to Hema to plan a trip to Bangkok during her college vacation since she was planning to be there with her parents and her two siblings, Bharath and Deepta in May ’83 before moving to the US in August. When Hema told me about this, I thought it would be a good idea to gift her a vacation outside India on the occasion of our third wedding anniversary. Around the same time my youngest sister Latha got engaged and her wedding was fixed on 1st May. The 2nd of May was our wedding anniversary, so I decided to leave for Bangkok a day later, on the 3rd, for a twelve-day vacation.

Hema accordingly wrote to Rangarajan about our plan to visit Bangkok. He immediately arranged for our ticket, Madras to Bangkok via Colombo, with an overnight stay at Taj Samudra, courtesy Air Lanka. We left for Madras by Brindavan Express on 3rd May and boarded the flight to Colombo on 4th morning; our maiden trip abroad. The Colombo flight was short one, compared to the time that we had to spend at the airport for immigration and security. We managed a bit of sight-seeing in Colombo and flew to Bangkok the next day. Rangarajan received us at the airport and being an ICAO official got us cleared in a jiffy. He drove us to his two bedroom apartment situated in an up-market location, which was already full with his family members.

Over the next few days Hema had some good time with her cousins, remembering their childhood days, playing card games, going around the city visiting many Buddha temples, the palace, and the location where the famous Hollywood movie Bridge on the River Kwai was shot, apart from indulging in some water sports at Pataya.  We accompanied Anu and Deepta who decided to go to Singapore for couple days. We did some sight-seeing at Sentosa and shopped at Mustafa. We returned to Bangkok and spent couple of more days mainly shopping. We flew back to Bangalore via Bombay after staying overnight at Hema’s uncle’s place. It is on our way to Bangkok that Hema informed me about her pregnancy!

After Hari’s birth in January 1984, I decided to quit my R & D job at Indian Telephone Industries Limited (ITI) as the three-year-old part-time enterprise that I had initiated was doing fairly well. I joined hands with Vishwanath, another entrepreneur and converted his proprietary concern to private limited company. Within a few months of establishing the new company, I initiated expansion plans. The growth was faster than we had projected. Hence, I had to travel often to Far-east and Europe for sourcing some of the raw materials, accessories and machinery requirements apart from visiting annual exhibitions like Electronika/Productronika at Dusseldorf, Hanover, Paris, etc. to know about the latest developments in technology. 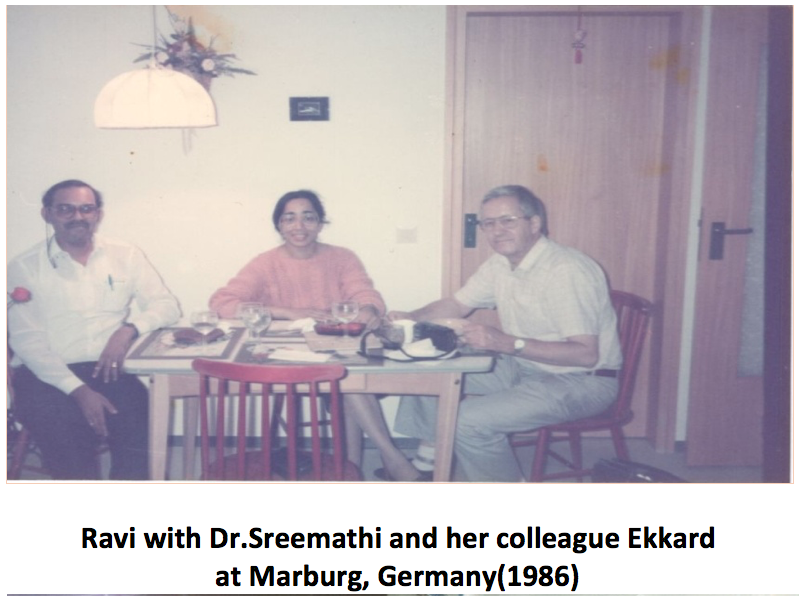 Unlike now, during 1985–91 there were several restrictions from the Reserve Bank of India (RBI) on foreign travel due to pressure on the government’s foreign-exchange reserves. On one such trip to Germany in 1986, I planned to spend a weekend with my cousin Dr. Sreemathi who was living at Marburg, the medical town of Germany, situated about 75 kilometres from Frankfurt. I boarded a fast train at Frankfurt going to Hamburg. After alighting from the train with my luggage at Marburg station, I realised that I had forgotten my leather overcoat (which I had borrowed from a friend) in the train. Leaving my luggage on the platform, I rushed into the train to collect the overcoat. By the time I could get down, the doors closed automatically and the train starting moving.

I did not have any choice but to prepare a plan in case my luggage wasn’t there on the platform. Being a fast train there were only a few stops. I got down at the first station when the train stopped; it was already more than twenty minutes. I had to wait for another twenty minutes to get a train back to Marburg. By the time I alighted at Marburg, it was more than an hour since I had left my luggage on the platform. My joy knew no bounds when I saw my luggage sitting at the same place where I had left it! 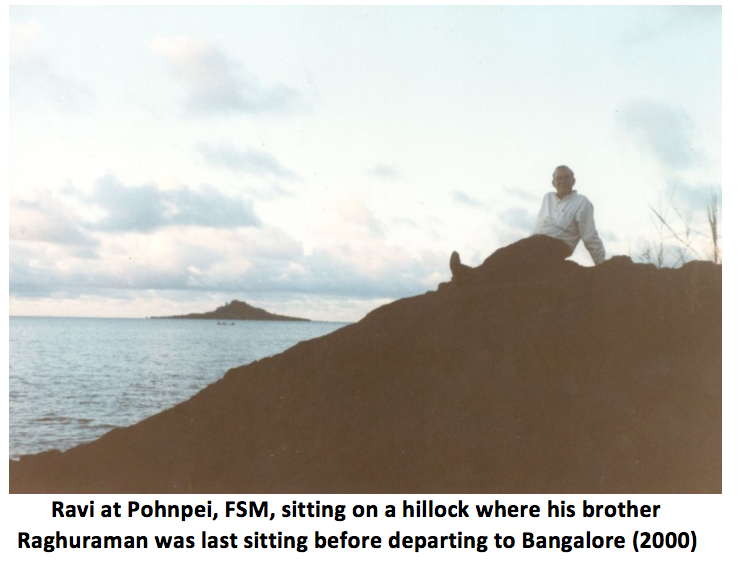 My only brother Raghuraman, while he was working with the government of Federated States of Micronesia (FSM) at Pohnpei (1996-99) was diagnosed with cancer of stomach and oesophagus sometime during May 1999. Pohnpei lacked proper medical facility and Raghu was single, so he came back to India for treatment in July. The disease was in an advanced stage by that time and in spite of all our efforts he succumbed to the disease on 2nd November 1999. In order to complete the legal formalities of taking possession of his belongings and closing the bank accounts in Pohnpei, I filed an affidavit with the High Court of Karnataka and took a judicial order to that effect. As I was busy with ongoing business and preparing to take charge of Rotary club’s presidentship from 1st July 2000, I planned my visit to Pohnpei during October 2000.

I was then Executive Director of Clixport India Private Limited (1994-2001).  I had asked my regular travel agent to do the necessary flight bookings and obtain the required visas. He had booked my tickets by Singapore Airlines for the Chennai–Singapore–Manila sector and Continental Airlines for Manila–Guam–Pohnpei sector. He had obtained  the visa for only Singapore and said that I could get a visa at Pohnpei on arrival because I was carrying my deceased brother’s passport which had FSM work permit and the judicial order  pronouncing that I am legally authorised to take over all his possessions in FSM.

I left for Singapore on the designated date and reached Manila the next day. I went to the Continental Airlines counter to collect the boarding pass to Pohnpei.  The person at the counter said that I must have a valid US visa because the flight had a stop at Guam, which is under the control of the US government. I tried to convince him that I was only transiting Guam and would not be going out of the airport. But he firmly refused and suggested that I should go back to India and get a visa. I approached Singapore Airlines and said they should have informed my travel agent when the booking was made. The airport staff of Singapore Airlines at Manila pleaded ignorance on the matter but took pity and allowed me to use their office to communicate with my brother’s friends at Pohnpei. 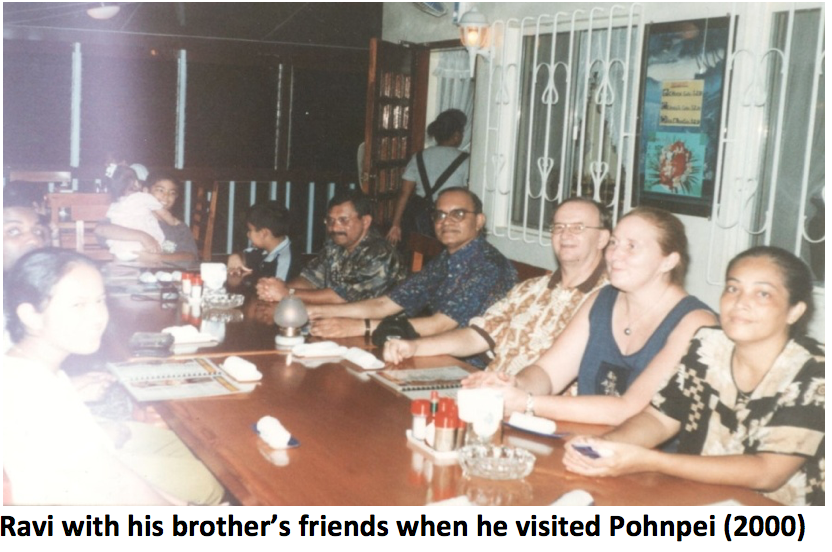 One of Raghu’s friends was a good friend of the US ambassador to FSM. After checking with the US embassy she confirmed the requirement of US visa even for transiting Guam and suggested that I can change the airlines to Air Nauru because they would not insist on any visa. She also said that I have to tip the Air Nauru staff USD 100 to get that done. I did exactly what was suggested and it worked like magic. But the Air Nauru flight to Pohnpei would leave only the next day. I took a retiring room at the Manila airport and slept well. When I returned back to Bangalore I claimed the difference in fare for Manila-Guam-Pohnpei return  between Continental Airlines and Air Nauru, which was little more than Rs. 10,000, much more than the $100 tip that I had paid! 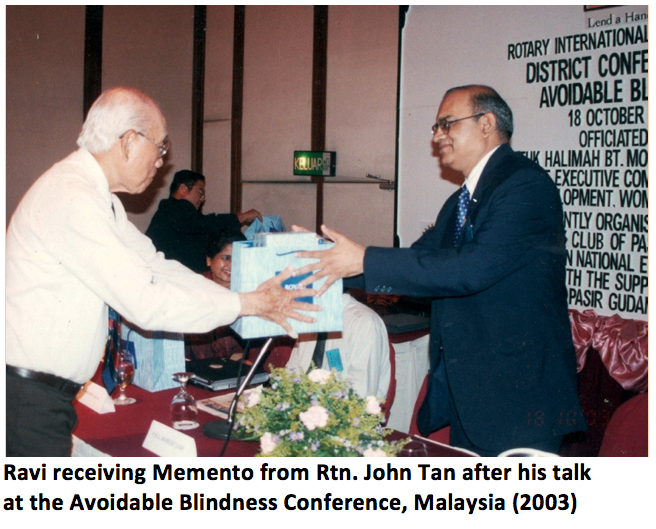 On another occasion in 2003, when I visited Malaysia to attend a Rotary conference I was not as fortunate as in Germany. I was one of the keynote speakers at a Rotary Avoidable Blindness Conference held on 18th October at Hotel Renaissance, Johor Bahru, a border town near Singapore. The conference was organised by Rotary Club of Pasir Gudang and they had booked rooms for the speakers in the same hotel. After attending a Rotary meeting in Singapore on 16th evening, I reached Hotel Renaissance on 17th afternoon. After the conference I planned to visit my nephew Dr. Aravind Bhashyam who was living in Kuala Lumpur, which is about 450 kilometres from Johor Bahru. The President of Rotary Pasir Gudang Rtn. Venkat was kind enough to reserve my bus ticket to Kuala Lumpur and said that he would drop me at the bus station.

On 19th morning after finishing a sumptuous breakfast, I was awaiting Venkat in the lobby of the hotel, which was pretty huge. I had left my laptop bag next to me and was reading a book. At the appointed time, I saw Venkat entering the hotel. I went up to him and exchanged pleasantries and must have chatted for a minute. When I went back to pick up my laptop bag, I was shocked to find that it was missing. The bag contained my passport and ticket apart from the laptop. I rushed to the reception and informed them about the theft and requested to check CCTV recordings. They said, first I have to file a formal complaint with the police.

Venkat drove me to the nearest police station and we filed a written complaint. Police accompanied us to the hotel to conduct an enquiry. As I recalled the person who was sitting close to me and saw him moving around, I told the police to enquire with him. But the police said without proper evidence they cannot question anyone.  They checked up with the reception about the CCTV recordings and were told that surveillance system is managed by Chief Security Officer and being a Sunday, he was on leave. Meanwhile, the person whom I suspected quickly vanished from the scene. As it was also getting late for the bus, I did not have a choice, but to leave the hotel only with the copy of the complaint filed duly acknowledged by the police, but without my laptop, passport and return ticket to Bangalore!

My nephew Aravind had come to Kuala Lumpur bus station to receive me and I narrated story of losing my bag to him. He said his neighbour works in Indian embassy and she would help in arranging temporary travel document. The next couple of days I had to spend in running around to the Indian embassy, the airlines office and immigration instead of enjoying a relaxed holiday with Aravind and his family. On 22nd I landed in Chennai to reach Bangalore the next day early morning by train.

Such incidents did not deter me from travelling abroad and I continue to feed my temptations by travelling either on work or holiday, as it keeps my grey cells functioning.