The use of thesis-writing is to train the mind, or

To prove the mind has been trained;

The former purpose is, I trust, promoted.

The evidences of the latter are scanty and occasional.

During the second half of 2006 I initiated a venture, G-Mantra along with a friend of mine, an alumnus of Indian Institute of Management, Bangalore (IIM-B), to train MBA students for entrepreneurship. We had won couple of contracts with a B-School at Mysore and one at Bangalore. During January 2007, I happened to see an advertisement of the prestigious Indian School of Business (ISB) inviting applications for a Certificate Program in Educating Entrepreneurship Educators (CPEEE) supported by Wadhwani Foundation1.  CPEEE was a six-month program with two classroom sessions for three days each at ISB with a break in between for four months. As my research was in the area of Business Incubation and I had initiated G-Mantra, I thought CPEEE will add value.

As soon as I sent my application, I received confirmation of my admission to the program along with the program schedule, a set of notes, and a few case-studies to come prepared for the first three-day classroom session commencing from mid-February 2007. The course methodology was very interesting and was conducted by reputed faculty drawn from USA, Spain and India. As part of the course we had to develop a detailed business plan, feasibility of which was evaluated by an expert. This program also exposed me to academicians in the area of entrepreneurship across the country.

While I was working with N. S. Raghavan Centre for Entrepreneurial Learning (NSRCEL), IIM-B, sometime during May 2007 I was invited by a Business School in Peenya to help them in strengthening the Entrepreneurship Centre, which they had just established during February. The centre was fortunate to have Prof. Ranganathan as director, an IITian who had worked in the corporate world for over three decades. He wanted me to develop a process for motivating students to take up entrepreneurship, which I happily accepted, as I had just then completed CPEEE; this would be the best way to put my understanding into practice.

While I was busy with these assignments, Bangalore Metro Rail Corporation Limited (BMRCL) issued a notice to acquire part of my ancestral house, which was situated on an artery road of Old Bangalore. This called for meeting several government officials now and then. On the whole, I did not give enough attention to my thesis writing during most of 2007 and hence could not complete it as per plan. I had barely managed to complete two of the proposed eight chapters by the end of 2007 and hence had to apply for an extension. In February 2008, I received a letter from the university that I could submit my thesis before 18th January 2009. However, Fate had a different agenda.

I had observed a growth in my right nostril and based on a friend’s advice I consulted a homeopathy doctor. He said he had treated similar cases earlier and in a few months’ time it would vanish. Unfortunately, it grew bigger and my blood pressure too went up. Hence, I decided to consult an ENT surgeon sometime in August, almost four months after I had initially observed the growth. After studying the scan report, he said the growth is nasal polyp2 and suggested that I get admitted to his nursing home; he would surgically remove the growth.

As part of the protocol, the tissue was sent for biopsy to rule out malignancy. To my shock, the tissue was found to be malignant, a rare type of cancer: soft tissue sarcoma (Stage IV). I gave the sample to another laboratory and the report reconfirmed malignancy. I met a couple of reputed oncologists for advice; while one said that I should get immediately admitted to the hospital so that he can do another surgery to establish a negative region for ensuring the growth was limited to only to a specific area, the other suggested that I go through one more scan and based on the report, if needed radiation could be done. I decided to go for another surgery to establish negative region as it sounded more logical. I underwent the second surgery during early October and fortunately all other samples (nearby tissues) were found to be benign. On the day I was operated for the second time, the BMRCL authorities had demolished the front portion of my ancestral building and on top of it, there was a theft the next night. It was really a testing time for Hema and she managed the situation extremely well.

By end of October 2008, I resigned from IIM-B and did not pursue with G-Mantra after completing the assignments on hand. I had to undergo again few more scans and tests, as new problem had developed under the right eye. In a span of six months I must have visited as many hospitals and consulted double the number of specialists in the areas of ENT, Ophthalmology, and Oncology. Meanwhile, as I had not progressed much in my thesis during most part of 2008, I applied for one more extension during January 2009 and the same was granted.

I made up my mind sometime in May to restart my thesis writing and complete it by October. When I spoke to my guide, who had by then become Secretary and Executive Director to Karnataka State Knowledge Commission, assured me of his full support. Whenever I had sent the chapters for my guide’s perusal, I got them back not just with corrections and suggestions, but always with some motivating message that made me push myself. I always appreciated my guide’s understanding of each of his research scholars to the last detail and his appropriate guidance. I knew my writing was not typically academic, for I was more used to business communication. I always wrote to the point and sometimes even bluntly so. I admire my guide’s patience in going through every single line (including punctuations) of the thesis and suitably correcting it or suggesting modifications.

My family was worried looking at the frantic way in which I was working, invariably extending to late nights. During this period, it looked as if my guide and I were racing against time to launch a satellite! It was an exhilarating experience, which I can never forget. On 4th November 2009, my guide sent me a text message (SMS) congratulating me on completing the thesis! Meanwhile, I had given a request letter to PhD section of Bangalore University informing them that I have completed the thesis and sought permission to submit. Finally, I submitted four copies of my thesis to BU on 18th February 2010. The frame-work that I had developed for Business Incubator in schematic format is given below: 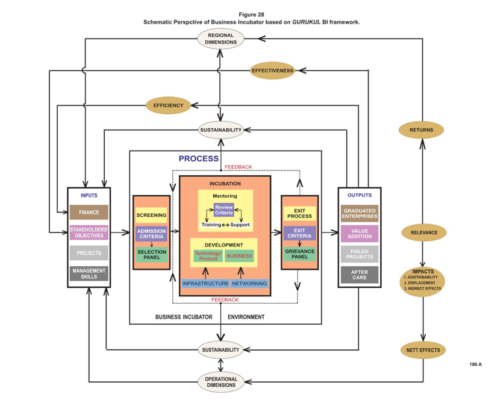 My final viva-voce was fixed for the 19th August 2009. There were two external examiners – one was from Department of Management Studies, Indian Institute of Science and the other from Department of Commerce & Management, Government College, Davangere. A few relatives, friends, and fellow researchers had gathered on the day of viva-voce as a source of encouragement. At the end of presentation and examination, my guide declared that he was pleased to announce that I have completed my PhD in all respects and henceforth shall be known as Dr. Ravikumar. He further said that it was a gift given to me for sixtieth birthday; just three weeks earlier, I had turned sixty! I only hope that soul of my brother Raghuraman would have rested in peace!

[1]The Wadhwani Foundation is a philanthropic organisation founded by Dr. Romesh Wadhwani, whose mission is to “accelerate economic development in India and other emerging economies.”

[2] A small growth, usually benign and with a stalk, protruding from a mucous membrane.