Spirit of Rotary and Positions Served

Individual service is helpless without money.

The two together can be God-sent to civilization”.

Having joined Rotary in the year 1988, it took nine years for me to join the club’s board and contribute something to the society. It took another three years for me to lead the club and take it to some heights in terms of community service projects. I could understand the real spirit of Rotary and its motto, Service Above Self, only when I started getting involved in implementing the matching grant (MG) projects (since 2014, called ‘Global Grant’), mainly in the area of Avoidable Blindness (AB). As I had mentioned in one of the earlier episodes, any position that one occupies in Rotary is voluntary. It is the prerogative of the District Governor to invite Past Presidents of the clubs for some position or the other at the district level depending on their interests. Though I had held the position of Chairman/Director of the District AB Committee on many occasions after being the President of the club during 2000–01, I had also held several district positions other than heading the AB Committee.

In the Rotary year 2003–04, District Governor Prabhashankar had requested me to be the Chairman of the District Committee on International Services. That year I organised a seminar to coincide with the visit of Gabriel Minder from Geneva and that resulted in our district doing a Matching Grant project. During 2004–05, Governor Yogananda requested me to be the Chairman of the Membership Development Committee and Co-Chairman of Polio Surgery Committee. We raised funds for fifty polio corrective surgeries, again through an MG project in partnership with a club from UK, apart from helping the clubs to grow their membership and improve retention.

During 2006–07 my home club hosted the Presidents Elect Training Seminar for which I was the Chairman. In April 2006, Hema and I went on a three-week tour of Europe covering Austria, Belgium, France, Germany, Italy, Portugal, Spain, and Switzerland to celebrate (belatedly) our Silver jubilee wedding anniversary. I used this opportunity to give talks in three Rotary clubs in three different countries – Rotary Sigmaringen, Germany; Rotary Ferney-Voltaire, France; and Rotary Senhora-da-hora, Portugal. This helped in developing and subsequently launching one more MG AB project, Nayana Jyothi, to support 2,000 cataract surgeries and 1,000 spectacles for children.

During 2007–08, District Governor Rajendra Rai had requested me to be the Director of Community Service. The theme of that Rotary year being Rotary Shares, he suggested that I form as many committees as required to implement service projects that would benefit the community. Having formed a record thirty-two committees, I published a Compendium of Service Projects, giving details of the committees, chairpersons, and members with their communication details, goals for each of the committees, and award points for the projects implemented. The book also had a section on Rotary Resources – Medical Professionals who are Rotarians, NGOs established by Rotarians, and all other relevant details pertaining to healthcare. The book was released on the occasion of installation of District Governor and was distributed to all the club Presidents and committee Chairpersons.

During 2008–09, District Governor U. B. Bhat requested me to be the Deputy District Trainer to organise District Training Programs apart from being the Chairman for the District AB Committee. In association with Ramkumar Seshu, a professional trainer, I developed training materials. During October Gabriel and Balazs again visited South India to review some of the projects that their club was supporting. I made use of their visit to organise a one-day district AB seminar and felicitated Gabriel and Balazs for their support to several AB projects. Based on the suggestion made by Gabriel, our club in association with Globe Eye Foundation launched Cataract-free RID3190 project in 2009 to ensure backlog of cataract in the geography of our district is brought down to zero by 2020. I was made honorary chairman for the project.

During 2009–10, District Governor S. Nagendra requested me to be the Assistant Governor for five clubs, couple of them requiring constant handholding to stabilize. During 2009–13 with the support of Ramakrishna Potluri, a member of the newly-formed Rotary Bangalore Lakeside who was working with SAP Labs, we could undertake 2,500 cataract surgeries and 75 children heart surgeries under Corporate Social Responsibility (CSR) program of SAP Labs.

During 2012–13, Rotary in India launched Rotary India Literacy Mission under which the TEACH programme was developed. TEACH is an acronym for

During 2013–14 and 2014–15 I was the Chairman for the District Happy Schools Committee and worked towards its implementation. 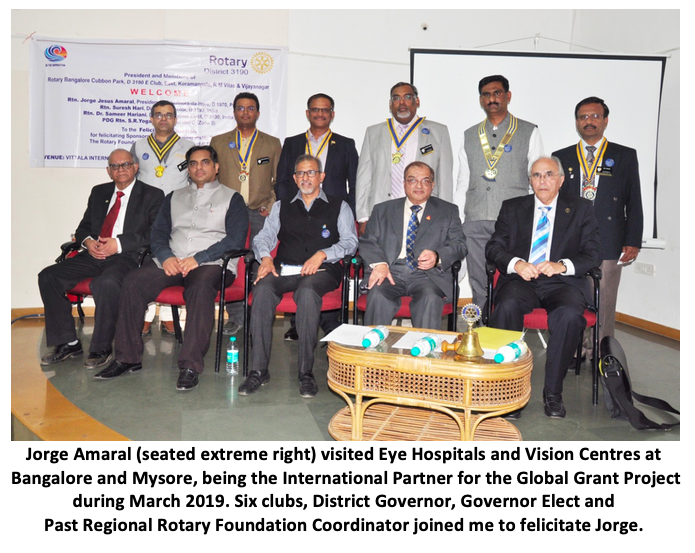 During 2013–14 I had also developed a Global Grant (GG) project with our good friend Jorge Amaral, partnering again to support 1,500 cataract surgeries and the project was completed by April 2015. I immediately followed this with another major AB project to establish four Vision Centres in rural areas – Dodballapura, Kanakapura, Jigani, and Maddur to provide access to primary eye-care for rural people. This project also supported treatment of 2,700+ cataract surgeries, 100+ paediatric eye surgeries, and 1,600+ spectacles for children. During the course of implementation, sometime during June 2018 we had an ophthalmologist from Turkey visiting us for four days to audit the project on behalf of the Rotary Foundation (TRF). Even Jorge Amaral, primary contact representing our international partner club visited the project sites during March 2019 and spent five days. He was very much impressed. 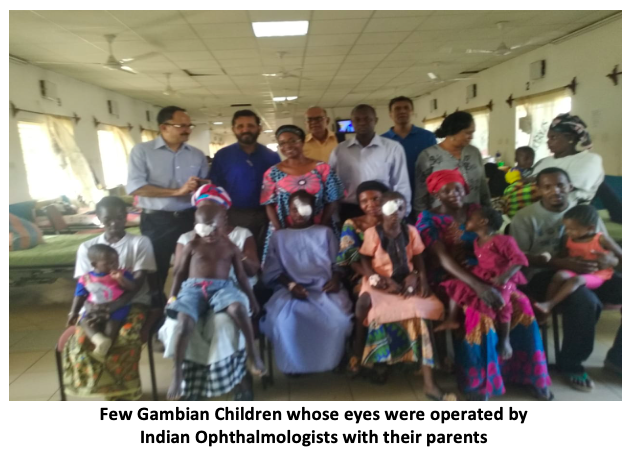 During March 2017 Dr. Ravishankar, a well-established vitreo-retina surgeon specialised in paediatric eye surgeries from Mysore, who had volunteered his professional services on several occasions outside India, requested me to put together a proposal to support 50 eye surgeries of poor Gambian children taking into account travel cost of three ophthalmologists and an anaesthetist and cost of consumables.  While he put together a team of three ophthalmologists and an anaesthetist who would volunteer their services and organised required consumables, I helped him in raising funds to meet the travel cost of the medical team. Further I had joined the medical team as a volunteer to provide logistics support apart from delivering talks at two Rotary clubs in Gambia. I shared this experience through an article in the Rotary Regional Magazine, Rotary News. I took up GG project for establishing Vision Centres and treatment of eye-related issues of poor patients and Gambian children eye surgeries project to commemorate centenary year of TRF, just as I took up the Cambodia AB project involving six Rotary districts across five countries to commemorate centenary year of Rotary.

2017–18 Governor Asha had requested me to conduct a mega eye screening camp for government school children during the first week of the Rotary year immediately after her installation as District Governor. It took almost three months of planning and we had to motivate over thirty clubs to support this mega camp. On a single day, 4th July 2017, between 10 am and 4 pm, over 31,000 children studying in 76 schools, spread across seven revenue districts of Karnataka were screened for refraction problem with the support of 13 eye hospitals. It turns out that it was a world record of sorts, because the maximum number of eye screening done in a day as per Guinness is 25,355 on 4th April 2015 at Karur.

Since 2018 I decided only to guide clubs which are interested in developing and implementing GG projects in the area of AB. I have guided two clubs so far and they have successfully obtained the grants from TRF. This year being Centenary year of Indian Rotary, I launched Rotary Vision 2020 project in association with government of Karnataka and a Multi-national company manufacturing lenses to screen 100,000 school children of government schools and provide spectacle to the needy.

Based on my experience of implementing AB service projects and dealing with various stakeholders – government, NGOs, Eye hospitals, corporate and technology driven start-ups in eye-care sector, Dr. Ramesh and Dr. Barnabas, my friends from academia, authoured along with me a few case studies and research papers. They have been presented / published at the national / international level conferences / journals. AB projects have become so synonymous with me during the last couple of decades, that many people (mainly in Rotary), even today, mistake me to be an ophthalmologist!