“Personality has power to uplift, power to depress,

power to curse, and power to bless”.

Major life-changing events such as marriage or retirement involve an ongoing process of emotional adjustment. While marriage, retirement and a few other events that have telling impact on human mind have been the focus of research and analysis by both clinical therapists and specialised research institutions, the emotional and psychological frontiers of a retired Rotary president remains a virtually unexplored area.

I generally plan my next line of activities well before I come out of the one I’m engaged with. I had already informed the Board that I would be resigning from the post of Executive Director of Clixport India Private Limited, from the financial year 2001-02. So during July to September I completed the process of fulfilling all the statutory requirements with reference to Income Tax and Registrar of Companies for the financial year 2000–01. I handed over all the company assets and documents in October to Shobhana who took over the management from me. I then focussed on registering for a doctoral programme and by middle of January 2002 I was registered as a PhD scholar.

As I was settling down in my research work, sometime during March I got a call from Past Governor Dr. Prithvi, informing me that he has recommended my name to the incoming District Governor Parasmal Bhansali for the post of Chairman, District Avoidable Blindness (AB) Committee. The Rotary International (R.I) President-Elect Bhichai Rattakul (who was also former Deputy Prime Minister of Thailand) had identified AB as one of the six major thrust areas and had appointed Prithvi as the AB Chairman for South Asia Region. Subsequently Bhansali had also called up and requested me to head the district AB committee.

Prithvi informed me that a national level Rotary AB conference was coming up at Goa in April and later a summit at Hyderabad in July, in which Past RI President Frank Devlyn was participating. He said it would be good if I could participate in both these national level AB meets. At the Goa conference I met Dr. Badrinath—founder of Shankara Netralaya, Chennai—an internationally renowned eye surgeon; listening to him was an eye opener for me. At the Hyderabad summit, I was introduced to Dr. Gabriel Minder from Geneva who was the RI President’s alternate representative at the United Nations during 2000–01. He was quite keen in promoting AB projects.

I had an opportunity to meet the then R.I President Bhichai Rattakul when he visited Bangalore during August 2002 and presented him a report on the district’s AB activities and projects. Based on the knowledge gathered at the two AB meets, I had organised a seminar in January 2003 for the benefit of club presidents and community service directors to know more about eye-related issues and how Rotary can play a role in mitigating problems of the poor in the area of AB. I had invited six ophthalmologists to talk about each of the eye-related issues – refraction, cataract, glaucoma, diabetic retinopathy, corneal diseases and eye donation, and how clubs can support AB projects. 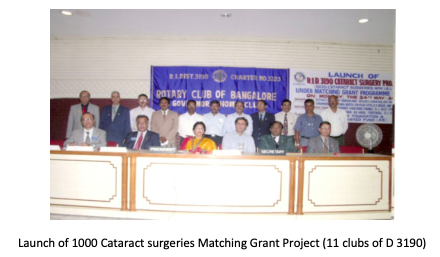 Sometime during August 2003 Dr. Gabriel Minder sent an e-mail informing that he would visit Bangalore during 6 to 8 November 2003. I once again organised a half-a-day AB seminar on the 7th of November with Gabriel as the key-note speaker. By this time, we had done several out-reach eye-screening camps both for children and adults. At this seminar Gabriel announced that his club was ready to support a Matching Grant Project to treat 1,000 cataract patients who needed surgery but could not afford it. The Rotary Foundation (TRF) under its Matching Grant (MG) Programme (since 2014 it is known as Global Grant Programme) encouraged clubs to take up service projects to meet the community needs by providing 50% of the funds raised by the partnering clubs, as a grant. Based on Gabriel’s support, I initiated a MG project before the end of December enlisting eleven clubs, each contributing Rs. 10,000. Gabriel connected me with Jorge Amaral, a member of Rotary Senhora-da-hora, Portugal, who immediately consented to support this project. This was the birth of the first AB MG project supported by eleven clubs in our home district and two international clubs along with TRF.

Gabriel revisited our district during February 2005; this time along with his wife Marie-Thérèse accompanied by fellow member Balazs Szeless and his wife Geno. They were our guests at the Rotary Centenary Celebration at our district and were specially recognised. I used this occasion to hand over formally the report of the Matching Grant Project, having completed 1,034 cataract surgeries with the support of five eye hospitals. The AB project thus enabled me to interact with several eye hospitals, ophthalmologists, clubs which wanted to undertake out-reach eye screening camps, communities that badly needed eye-care support, and international clubs from Europe who readily partnered with us. Though I had attended a few club meetings abroad while travelling on business, implementing the matching grant project gave me better understanding of Rotary as a service organisation. 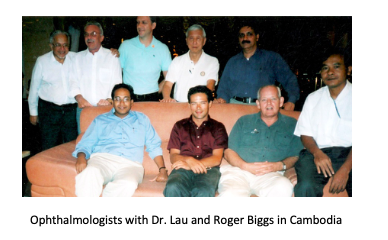 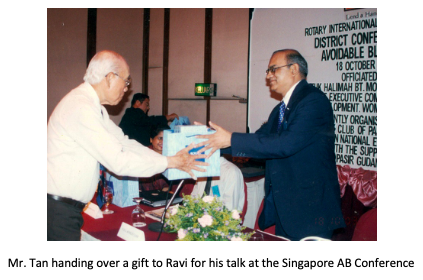 I was invited as a speaker at the AB Conference held at Malaysia on 18th October 2003 and later at Singapore during 1st and 2nd May 2004. The participation in Singapore AB conference resulted in me joining hands with Dr. Lau of Rotary club of Singapore and Roger Biggs, field executive of International Resources for Improving Sight (IRIS), an International NGO, UK, stationed at Cambodia, to do a joint AB project for restoring eye sight of underprivileged Cambodians. I raised funds to provide required consumables for two hundred surgeries and travel cost of two ophthalmologists from Bangalore to do voluntary service by operating cataract patients in Cambodia. For this project Gabriel had contributed US$1,000 from his club. Two more ophthalmologists from our neighbouring district 3180 and one each from Singapore and USA did voluntary work for two weeks during 29th November to 13th December 2004. Thus, over four hundred Cambodians got their sight back in couple of weeks. IRIS took care of local stay and hospitality of the visiting Ophthalmologists. 2004–05 being centenary year of Rotary, I was happy that I could be part of such an international project that brought together five Rotary districts from four different countries – France, India, Singapore, and USA to do voluntary work in a fifth country – Cambodia! 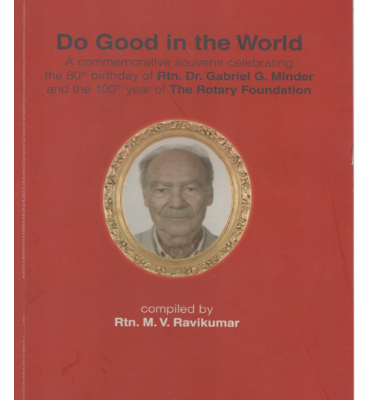 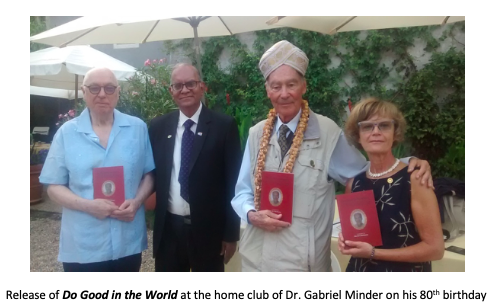 Both Gabriel and Jorge became so close to me that I visited them twice, once in 2006 and again in 2016. I was highly impressed with Gabriel’s simplicity, humility, and compassion towards humanity; I decided to bring out a felicitation volume highlighting the contributions of Gabriel to humanity. Rotary year 2016–17 was celebrated as the centenary year of TRF and hence I chose the title Do Good in the World for the book to align with the motto of TRF. When I explained this to my son Hari, who also had interacted with Gabriel on a couple of occasions, he whole-heartedly joined hands with me (also given that he’s a writer and designer). I decided to release the book at Gabriel’s home club, Rotary Ferney-Voltaire on his eightieth birthday, which was on 4th August. The whole project was completed in less than four months. Hari not only edited my articles but also put together photographs at appropriate places, designed the book, and wrote an epilogue. Hari also had work in Europe at that time, so he joined me during my visit to Geneva to celebrate Gabriel’s eightieth birthday and the formal release of Do Good in the World at his home club. Hari entertained members of Rotary Ferney-Voltaire that evening by playing the violin.

Alongside my research, I was seriously involved in AB projects and had become a regular participant/speaker in AB seminars and conferences. By the end of the Rotary year 2009–10, I had not only completed my PhD but had also successfully completed seven AB matching grants projects worth over US$400,000.

Spirit of Rotary and Positions Served
Scroll to top