“Parental love is the only love that is truly 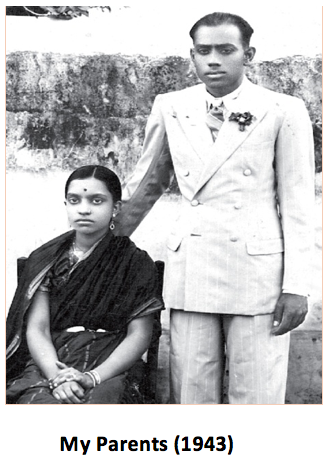 In today’s technology-driven, self-centric world, this topic may assume some importance for sustaining humanity. I’m fortunate to have been born in a family that was mainly driven by duty and values. It is difficult to teach, especially the young ones, the concepts of duty and values. In my growing years, I had never bothered to understand these concepts. However, during my student years, despite all the distractions, I always ensured that I performed well in my academics and undertook a few household chores as and when needed, without any pressures. I’m doubly fortunate for having born in a family that was living in their ancestral home. As I continue to live in a house where three generations of my ancestors lived, I realize its role in developing the concept of responsibility in me. I managed to modify the ancestral home in instalments, spread over almost twenty-two years, not just for our comfortable living, but for the benefit of my future generation. This long process taught me the concepts of preservation and development through patience and perseverance.

While I was a student of sixth semester Electronics Engineering (1971), my elder sister’s marriage alliance was finalised. The wedding was to take to place sometime in the end of May or early June, as we—myself and my two younger siblings—had our public examinations during April. Suddenly sometime during early April, a few relatives of the bridegroom dropped into our home, requesting my parents to perform the wedding as early as possible because the groom’s mother had suffered a heart-attack and was admitted to hospital. The elderly lady wanted to see her son married as early as possible! My father tried his best to raise funds for the wedding from a few of our close relatives, without much luck. He didn’t have any other option but to sell the backyard of our house measuring about thirty percent of the area of the site. There wasn’t enough time to fix a marriage hall and the wedding was performed in our ancestral home. Three of us, the bride’s siblings, were busy writing examinations on the day of wedding and hence could not attend it!

The toilet and out-house were situated in the backyard of the house, which was sold, so the first instalment of modification that I undertook for my ancestral home was to build a toilet and a sump in the space that was available and shift the sewage line from the back of the house to the front (June 1971). The total project cost was around two thousand rupees and it took almost a month for completion.  As my father had sold the site out of desperation for a throw-away price, the buyer did not have any problem in giving us six months time to hand over possession.

The rear portion of our ancestral house had been let out, and having sold the backyard, we got the tenant vacated. To make good for the rent that we were no longer receiving, I took up modification of two rooms in the front of the house facing the main road, converting them into shops for letting out (January 1973). Within three years, one of the shops wanted to expand its business and needed more space in the ground floor, so I took up construction of additional space on the first floor to make good for the space let out for expansion. When the additional space on the first floor was completed it was the centenary year of the purchase of our ancestral home (1977). This was celebrated along with the sixtieth birthday of my father.

Sometime during end of 1979, Smt. Malathi Rangaswamy approached my parents to propose her daughter Hema in marriage to me. Before that several parents had approached my parents for the same purpose. However, during most of 1974-79 I was part-time student apart from being full-time Research & Development (R&D) engineer at Indian Telephone Industries Limited (ITI). There was no possibility of my agreeing for marriage. By 1979, not only had I completed a couple of diplomas and a post-graduate degree, but established a part-time venture also. 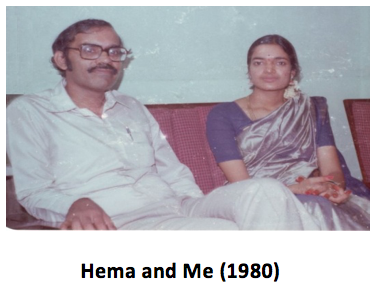 After having a chat with Hema a couple of times, I found her complimenting my nature in several aspects. With both our personal and family values aligning, we did not waste too much of time in deciding to come together in life. During first three years of marriage, we travelled across India a few times and once abroad before settling down in life. Hari, our first son was born in 1984 and brought lot of cheer in the family as he was the first child belonging to fifth generation. When he was born Hema’s maternal great-grandfather, Nadipuram Rangaswamy (1886–1985) was alive. By the time our second son Ram was born (1986), I had resigned from ITI to become a full-fledged entrepreneur.

As I required more space for my home-office, during 1987 I took up further construction on the first floor, which called for demolition of old ground floor. It is during this construction, we found a well while digging for laying foundation. It was a great boon, as my family struggled with water shortage issues for decades! Today, we have water from three sources – the City Corporation, the well, and through rainwater harvesting.

By 1992 we managed to get admission to both the children in the same school, which was about four kilometres away from home. Around the same time I got the rest of the house modified. As my father (1989) and father-in-law (1994) had passed away, my mother living abroad with my brother, and Ram requiring more attention to get used to society, I had to come out of my business ventures. I shifted to a rented house close to the school for one year (1996) to enable Ram to spend more time with his peer.

While Ram required more attention, Hari could take decisions for himself by the time he entered high school and did not like much interference. With Hema being busy with her college responsibilities and music classes, I had dual responsibilities of ensuring my mother and mother-in-law enjoyed their role as grandmothers and at the same time, children grew up with values and gain confidence to become responsible for their own lives.

Being born to parents who were mostly duty bound and hence spent most of their time in daily chores, I enjoyed total freedom during my growing years. However, I also became conscious about my responsibilities early in my life. This helped me greatly when I became a parent. Hema, though silent most of the time, played a major role in the parenting process.