Each one grows in different directions,  yet our roots remain one.”

Born in my ancestral home as the third child of the fourth generation, it was fascinating for me to visualise the world of my forefathers and understand the way they lived. It is also interesting to note how even the career of five generations (including my son Hari’s) got evolved over time. 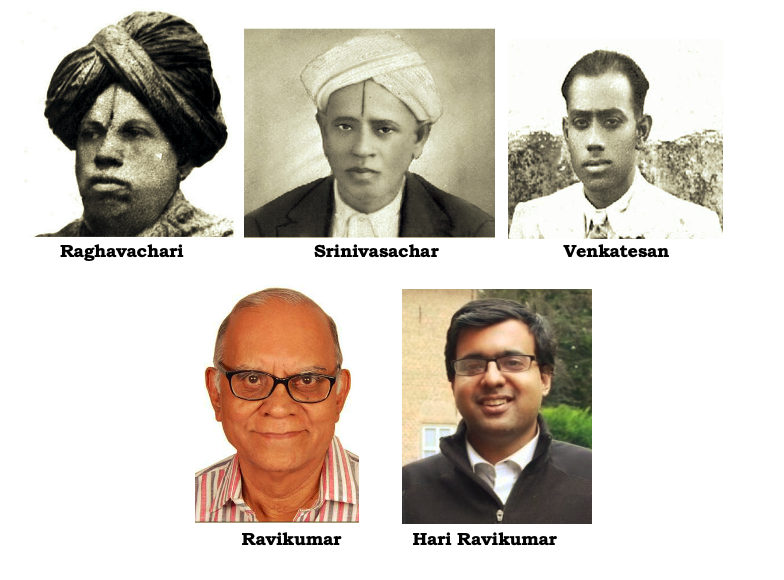 My paternal great grand-father M. Raghavachari initially migrated to Bangalore to take up a job in the City Corporation in the 1870s. My paternal grand-father M. A. Srinivasachar took up a job in the State government’s Insurance department (called MGID in those days) perhaps because his brother-in-law S. Krishnamachar1 was already employed as an officer in that department. My father Mysore Venkatesan took up a job in Central government (Military Engineering Service) in the early 1940s. During the early 1970s, Public Sector Undertakings like Bharath Electronics Limited (BEL), Hindustan Aeronautics Limited (HAL), Hindustan Machine Tools Limited (HMT) and Indian Telephone Industries Limited (ITI), most of which were established post–independence, were the major job providers for engineering graduates in Bangalore. After completing my engineering in 1973, I got employment in ITI as an Assistant Executive Engineer in the Research and Development department. In 2006, my elder son Hari got a job at Infosys, then the emerging Indian MNC, during campus placement. Each generation, thus  evolved progressively from the perspective of type of organisation they worked for and their approach in managing the Joint Family system also changed over time.

Generally, the man who earned money for the family was considered as the head of the family and the womenfolk of the house worked under the guidance of his wife. However, during 1877 to early 1930s, it was Lakshammal (known as Yatchi paati)—the widowed sister-in-law of Raghavachari and after that Kaveriammal till 1970s—who called the shots in the Ulsoor home. I assumed charge of managing the house affairs in early 1970s as I understood the need for managing based more on logic and aligning with the external world rather than emotion.

Raghavachari and Thiruvengadamma had two daughters and two sons – Kanakammal (1877–1973), Srinivasachar (1880–1942), Krishnammal (1884–1902), and Venkateshachar (1886–1941). Kanakammal was married to Krishnamachar when she was eleven and her husband was twenty. Krishnamachar’s father had died young and hence he grew up with his maternal uncle who was a barrister educated in England. This perhaps motivated Krishnamachar to become a graduate and he was employed with the Mysore Government Insurance Department as an officer.

R K Sridhar Murthy, who has authored a book on Malleswaram2, explains that both Malleswaram and Basavanagudi had been developed prior to the plague attack in 1898. In 1896, as part of a city expansion plan, plots in Basavanagudi and Malleswaram were put up for sale. But there were hardly any takers since the rates were high and people were not eager to shift to new, underdeveloped localities. However, the most documented and dreaded outbreak in India was of bubonic plague (1896-1899) that spread terror across Bombay and Calcutta Presidencies also attacked Bangalore around 1898 changed that. The rates were drastically lowered to encourage people to move to new layouts, thus relieving congestion in the city3. This perhaps motivated Krishnamachar to buy a site and build a small house in Malleswaram sometime during 1902.

In 1899, M. A. Srinivasachar got employed in the same department as his brother-in-law and later got married to Kaveriammal from Nellore. In 1901 she moved into the Ulsoor home to live with her husband’s family. The first child born to the couple became a victim of plague. So the couple, with other members of the family, shifted to Malleswaram to live with Kanakammal family. As he was living with his brother-in-law, young Srinivasachar helped him in building additional rooms to the existing house. This perhaps gave him the relevant experience to take up the rebuilding of Ulsoor house later in his life.

Krishnammal got married to Kuppuswamy, whose parents also were living in Ulsoor, but died young. The couple had one son. The youngest of Raghavachari’s children, Venkateshachar was working for Indian Railways in Mysore and after getting his only daughter married, he took early retirement in favour of his son-in-law getting his job. He came back to Ulsoor to put up a Sweets Store and is supposed to have lost a lot of money in business. His elder brother Srinivaschar paid him a substantial amount of money and had him sign a ‘release deed’ for the Ulsoor house property. Thus, his only son Venkatesan inherited the property after his father’s death in 1942.

Meanwhile, Srinivasachar and Kaveriammal’s only daughter Kanakammal (1912-1997) was married in 1925 to A. V. Ramasawmi (1899-1980), who had done his engineering diploma from the Indian Institute of Science. The first three children of the couple as well as the eighth one were born in the Ulsoor house. Just before retiring in 1935, Srinivasachar planned to modify the old house totally and got all the approvals from the city corporation. He spent almost ten months to rebuild the whole house spending all his retirement money. While retaining the old plan, new one was built with high roof – partly Madras Terrace (front portion) and partly tiled roof (rear portion) for better light and ventilation. I had the opportunity to see the accounts that my grand-father had maintained for making the main door of the house, which had then cost him a princely sum of two hundred rupees. While the original house including the cost of site was eight hundred rupees in 1877, the cost of just the main door in 1935 was a quarter of that amount. One can understand the cost escalation in six decades.

After Srinivasachar’s death in 1942, his only son Venkatesan who was doing an internship in Bezwada (now called Vijayawada), got married to Indira in 1943 and settled down with his widowed mother at Ulsoor. Venkatesan’s brother-in-law A. V. Ramasawmi, who was working for a British company, was posted to Dacca (now Dhaka); so he had left his six children—in the age group of four to fifteen years—at the Ulsoor house for the purpose of schooling under the guardianship of Venkatesan and Indira. The couple thus started their married life with a huge responsibility although they had the support of the just-widowed Kaveriammal.