Settling is the art of taking easy way out. Sure, it will work.

But you will never know what was truly in store for you,

if you had the courage to do what was right in your heart.

Back in our ancestral home, we were slowly settling down in the modified first floor. We lost quite a few things in our absence. It took a month to segregate and discard many things that had accumulated over decades. In November 2011, Hari decided to shift to the flat that I had purchased sometime during 1995 in Frazer Town (about four kilometres from our home).

Our neighbour Sunil, a middle-aged aggressive Marwari, is into financing business. In three years (2009–11), he acquired three properties – two of them adjacent to our home and the third one behind the first one. His plan was to build a five-storey commercial building.

Sunil started the demolition of the neighbouring properties in September 2012 and this went on for a few months. When he started digging for laying the foundation, there was continuous flow of water. They were not able to identify the source. After a few months’ consultations with his architect and structural engineers, Sunil decided to erect a pile foundation in view of water logging.

Because of the constant construction activity next door, there was lot of dust and noise during most part of the day. In April 2013, the four of us (my mother, Hema, Ram, and I) were down with fever and allergy. Hema was the worst affected and she had to attend to her college work from June. I decided to shift for a couple of years to the house that Hema had built in the plot gifted by her parents near M S Ramaiah Hospital, off New BEL Road (about nine kilometres from our home) until the construction work in our neighbourhood got completed. After getting the tenant vacated in May, we had to carry out certain additions, mostly carpentry and electrical work and get the whole house painted. We shifted by the end of July 2013. Hari also vacated the flat at Frazer Town and joined us in November. As I had couple of assignments on hand, the modifications planned for the ground floor of our ancestral home got delayed.

Meanwhile, my friend Rtn. Manjunath Shetty who was elected as the District Governor for the Rotary year 2014–15 approached me in January 2014, requesting for office space of 400 sq. ft. during his term as Governor. I suggested that he use the drawing room on the first floor so that I could independently carry out modifications in the ground floor. Rtn. Shetty moved in during March 2014. Hema decided to visit her brother and cousins in the US during April and May, so I decided to start the modification work of the ground floor in June, after her return. 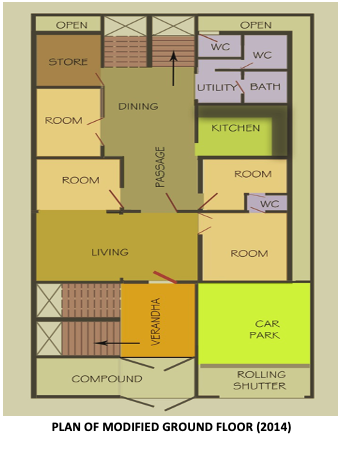 Once the metro work was completed, Bruhat Bengaluru Mahanagar Palike (BBMP) relaid the road and as a result, the floor level of our house came down as compared to that of the road. During the rainy season, the ground floor was flooded. While doing the modification, I had to raise the floor level of the entire ground floor by two feet to avoid future flooding. All the doors and some of the windows in the ground floor had to be removed and re-fixed. As my mother was getting old, I decided to modify the dining room into her bedroom so that I could construct a small attached toilet next to it. The kitchen was also accordingly modified. This time I handed over the labour contract to Murugan #2, the last of the four contractors engaged during the modifications and additions done during 2009–11. The work which commenced from June 2014 got completed by end of the year.

In August 2014, Ram was unwell for quite a while and had to be admitted to a nursing home for a couple of days. Immediately after that Hema had some pain under her right arm and decided to consult a General Physician (GP) who had her practice nearby. The GP suggested a scan to be done and referred Hema to a radiologist. Seeing the scan report, the GP suspected breast cancer and recommended that Hema consult a general onco-surgeon Dr. Ganesh Shastri who was practising in Malleswaram. After a slew of preliminary tests, the diagnosis confirmed it was Stage 2 breast cancer. Dr. Shastri suggested an early surgery and based on the pathology reports, he said that Hema may have to undergo radiation and chemotherapy. Hema was operated in October 2014 and was discharged in three days’ time. Coincidentally Hari was visiting the US during the surgery (as was the case when I got operated in 2008).

A few weeks after recovering from surgery, Hema consulted a Radiation Oncologist in M S Ramaiah Hospital and went through some thirty sittings of radiation, five times a week, during November end to early January. She was also attending to her work. Meanwhile, having completed the modifications, I shifted with my mother to our ancestral home, while Hema was managing with Hari and Ram at her house.

After completing the radiation cycle, Hema consulted a Medical Oncologist who suggested that she undergo four cycles of chemotherapy as protocol treatment. Hema reconfirmed this with another oncologist, specialised in breast cancer as suggested by one of her relatives who is also an oncologist practising in the US. In February 2015, Hema was admitted to a Cancer Hospital in South Bangalore for chemotherapy, because my niece was living nearby. Hence, I could give home-made food to Hema when she was in the hospital. I brought Hema back to our home after her first chemo, while Hari and Ram continued to stay at the other house. 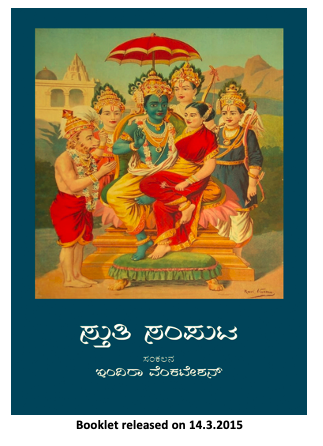 After Hema underwent the first cycle of chemo in February, I observed my mother giving a set of handwritten manuscripts to my office assistant, requesting him to make twelve copies. When I inquired with her about this, she said, “Oh, they are shlokas (verses) on Rama and Anjeneya that I have been reciting for a long time and I want to give a copy to each of my daughters, my daughter-in-law, and grand-children.” My mother’s birthday was three weeks away and I suggested to my son Hari and nephew Naresh to develop a small booklet containing these hymns with a note by the renowned polymath Shatavadani Dr. Ganesh. They readily agreed. The book titled Stuti Samputa (in the company of prayer) was released on the occasion of my mother’s eight-eighth birthday formally by Dr. Ganesh in the presence of all members of my family at our ancestral home.

Hema completed her four cycles of chemo by April and started attending to her college work by May and took voluntary retirement from her work a year earlier to superannuation. Though most of the modifications were completed in the ground floor by end of 2014, after Rtn. Shetty vacated the first floor office in July 2015, a few more additions were carried out – rain water harvesting facility, tile roofing the compound, and some internal partitions in the first floor to meet my office requirements.

For the last six years, my mother, Hema, and I have been living in the ground floor. Ram lives in the rear part of the first floor and the front part is used for office purpose. Hari lives in the house built by his grand-parents at Malleswaram.