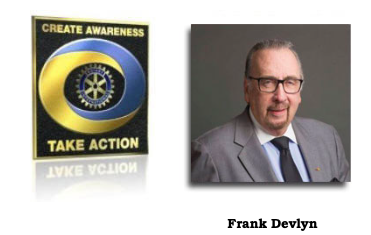 “Wouldn’t it be great to have more of a sense of purpose to your life?

Wouldn’t it be wonderful to have more real friends?

The President of Rotary International (RI) is chosen by a committee of seventeen past zone directors in the month of September every year. Rotarians who aspire to become the RI President should have completed their term as club president, district governor and zone director. The RI President is chosen twenty months before he takes charge. The nominated RI President develops a theme for his year and announces it at the International General Assembly that takes place every January at San Diego, USA. More than five hundred elected District Governors—and their spouses—across the world who take over leadership of their respective districts from the first of July are trained for a week at the International Assembly. During January 2000 RI President-Elect Frank Devlyn from Mexico, a third generation entrepreneur managing a chain of optical stores had  announced his theme for the Rotary year 2000–01 – Create Awareness, Take Action. Dr. Prithvi Raval, a second generation dentist as well as a second generation Rotarian and District Governor from the Rotary Club of Bangalore was one of the Governor-Elects who had participated in the January 2000 International Assembly and subsequently took over the reins of our district (RI District 3190) on the eve of 1st July 2000 at Hotel Le Meridian.

Just as the District Governor-Elects are trained at the International Assembly, President-Elects (PEs) of all the clubs in the district are trained during March or April to prepare them for taking over the leadership of their respective clubs. The program, known as President Elects Training Seminar (PETS) lasts for one full day. The objective of PETS was mainly to ensure that the PEs prepare a comprehensive plan to strengthen club membership and develop proposals for service projects in the focussed areas identified by The Rotary Foundation (TRF) that would meet the needs of the community in and around where the club meets.

To raise funds for the service projects, our board had decided to bring out a souvenir that also would serve as club directory. With every member pitching in with their network, we could collect over Rs. 175,000 (it was big money in those days!) in a short span of two months. Since I was well-acquainted with Ramesh Pai, a scion of the famous Pais of Manipal, who was also Past RI Director, I requested him to be the chief guest for the installation function, to which he happily consented. To be the guest of honour, I had requested my good friend and college-mate, Dr. Prasanna Bhat, a long time banker and former Managing Director of ITCOT Consultancy Services Limited, who had just then returned from Saudi Arabia after serving as an advisor to the Saudi Arabian Monetary Agency. We also had Dr. Prithvi Raval, District Governor; Rajendra Rai, Assistant Governor and Ramji, Immediate Past Governor as guests for the installation ceremony. 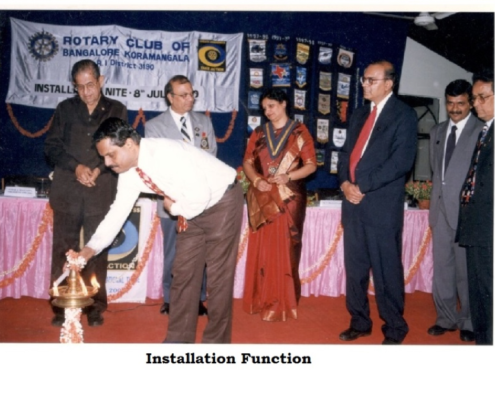 I had prepared the calendar of events for the entire Rotary year and the club raised the required resources, so it was possible to implement all the projects planned and manage the weekly meetings smoothly. In August, the month dedicated to Club services, we hosted a District Task Force workshop on Membership Development, Retention and Public Image. A day before the workshop, the legendary Kannada thespian Rajkumar was kidnapped by Veerappan, a forest brigand, which resulted in a shutdown of Bangalore. We had to postpone the workshop. Even so, we had more than hundred and fifty Rotarians attending it. We formed the Rotary Community Corps—a group of chosen few community adults—in Chembenahalli, a village situated eighteen kilometres from Koramangala to undertake projects that would help the villagers. We celebrated the 53rd Independence Day at Chembenahalli Government School and conducted an eye screening camp for the villagers as well as a veterinary camp for the cows.

In October, the Vocational Services month, we conducted Interface 2000, a seminar to prepare final year MBA students for job interviews, in association with Canara Bank School of Management Studies, Bangalore University.  CEOs and HR professionals addressed the students. In association with the Electronics Industry Association our club conducted a one-day seminar on WTO, IPR and Patents for the benefit of small-scale industries. In November, we had Governor’s Official Visit (GOV) during which the Governor ensures that the club has complied with all the requirements of RI, membership growth/decline, financial status, projects implemented and possible support to the Foundation.

The RI President cannot attend District conferences happening in every district and so he appoints a certain Past District Governor to represent him, who would then send him a brief note on the proceedings of the conference. Our District Governor had appointed me and Hema to be the aides to the Rotary President Representative Past Governor Jagdish Khanna of Mumbai and his wife Kiran at the District Conference, held on 10th and 11th February 2001. We were with the couple from the morning of the 9th when they landed until the evening of the 11th when they left, except for the hours when they were asleep! Jagadish, on his return to Mumbai, wrote a touching letter. I reproduce it verbatim:

Kiran and I have been lucky recipients of God’s graces. As such sometimes we take things for granted. We were expecting to be well received and well looked after in Bangalore. But we must admit and record that our stay in Bangalore have constituted three of the best days that we ever had in our lives. Everybody was perfect. Dear Hema and you were out of the world. God has given you both external and internal beauty and wisdom. You were perfect aides. I had never believed in the existence of perfection. But after experiencing the love, sincerity and diligence with which you did what was asked of you by your Governor, I have started believing in perfection. Hema and you have enriched Kiran and my lives and we both are grateful to you both.

During one of our board meetings it was resolved to split the club bank account into two independent accounts; one for normal administration activities – to pay RI dues, district dues, weekly meeting expenses and other operational expenses of the club and the other, exclusively for social service projects. This was to enable the club to focus on service projects, one of the main objectives of Rotary. Though we had initiated the idea of forming a trust during 2000–01, it materialised only in 2003. 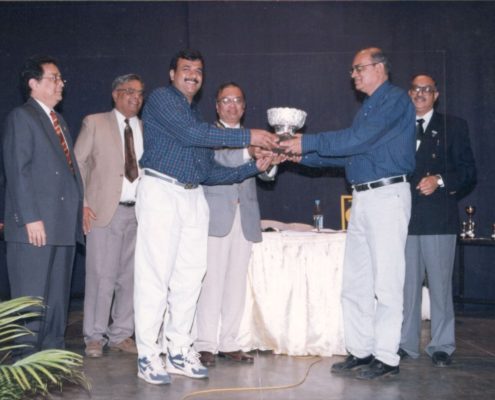 The Rotary year was full of actions and at the Awards ceremony celebrated at the end of that Rotary year, we were adjudged as the best club in our category. The year concluded with me hosting a thanks-giving dinner again at Century Club. I had prepared a report covering comprehensively all the activities, projects and events that took place during the year with a statement of receipts and expenses. Along with the report, I gave a booklet giving tips to take care of one’s health to all the members; this was an expression of my gratitude for the opportunity provided.

Having completed my term as President with immense satisfaction, I stepped into the world of service without much realising what was in store for me during the coming years. 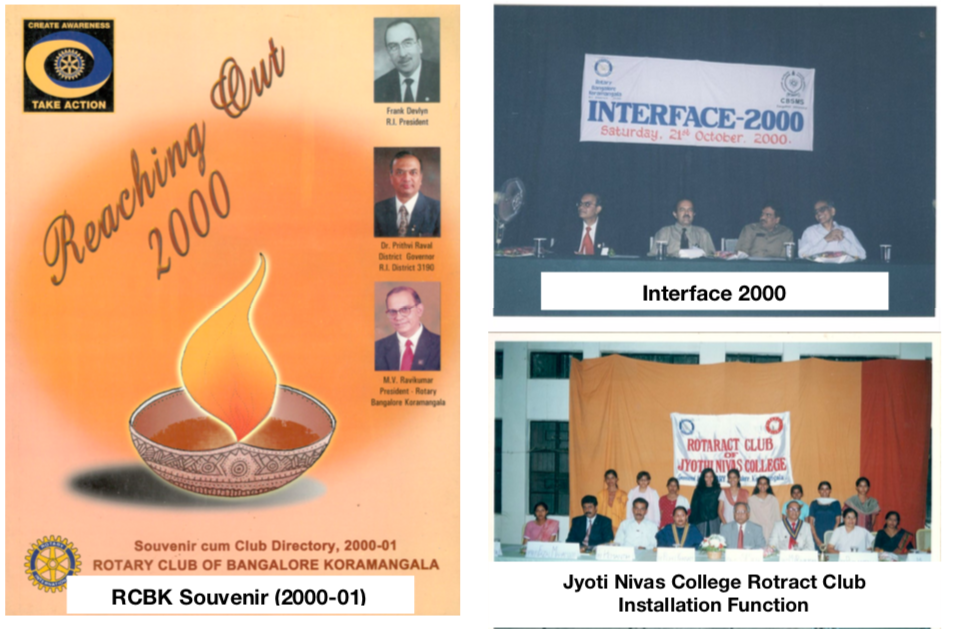 Getting into the Groove of Rotary