“Faith consists in believing when it is beyond power of reason to believe”. – Voltaire 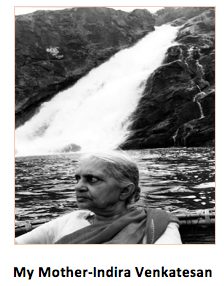 I must have been three or four years old when my mother started teaching me Sanskrit shlokas. My mother recited many such shlokas in the early morning and also during the day when she was relatively free from work. Because of this, by default, some of them got embedded into my memory. Because the shlokas were taught by my mother, who has taken so much care of me, I believed that reciting such shlokas will make me happy and successful. Almost until I entered adolescence, I regularly recited some of the shlokas. Once I entered my teens, my curiosity, peer groups, extra-curricular activities, and academics occupied most of my mental space and reciting these shlokas stopped. After I turned sixty, when I tried to understand the meaning for these shlokas, I found that they mainly praise with gratitude the various forms of nature/God. When my mother desired that  few of the shlokas that she was regularly reciting be given to her children and their families, I got them published in the form of a booklet and distributed to my immediate relatives and few friends  on the occasion of her Eighty eighth birthday (2015).

During my teens, I recited some of the shlokas during the examination season or when I was unwell. I also correlated the shirt that I wore on the days of exams with the marks that I got. I believed for a while that the shlokas I recited and the dress that I wore had some positive effect on my performance. When I entered my engineering course, these beliefs slowly vanished; I had to put more efforts in understanding the subjects with reference to real life applications. By the time I completed my engineering and landed in a plum job, I realised importance of knowledge and skills – the two essential elements to handle real life situations and human relations for comfortable survival.

It is only after I entered the entrepreneurial world that I realised the need to understand the concept of trust. From my childhood I was trained to walk my talk and generally, I trusted whomever I came across in my life. My colleague in the production department at Indian Telephone Industries Limited (ITI) wanted to place an order for instruments; I didn’t have a registered enterprise, so I approached a good friend of mine (a supplier to ITI), requesting him to take the order in his company’s name and pay me the money after he received payment from ITI. He agreed with a condition that I should give him ten percent of the bill value as service charges! I went ahead and supplied the instruments through his company. To my dismay, even after two months of delivery, I didn’t receive the payment from my friend. I checked up with the accounts department of ITI and they informed me that the payment was made some time back. When I followed up with my friend giving the details of payment made by ITI, he paid the money with great reluctance; of course after deducting ten percent without any apology!

I realised that for reasons best to known to them, many entrepreneurs do not walk their talk. There are a few exceptions; but, even those in the corporate world create hype about themselves and their products or services, beyond the actual value. During my initial year of business, I believed everyone and felt cheated on several occasions – customers not making payments as promised, suppliers not delivering in time, employees not turning up for work on crucial days, and so forth. Over a period of time I learnt to move away from such persons, who were not serious about the purpose of their action or could not understand my point of view, which I had developed based on a value frame-work. Thus, the number of people I could rely upon came down drastically over a period of time!

While I grew up with a strong value system giving importance to honesty, integrity, and hard work, I realised that these are generally uncommon in the business world. After a few years of being in business, I started realising the fact that I was good enough mainly for initiating and managing start-ups, because it calls for visioning and hard work at low cost or no cost to the enterprise. I also understood that though I had the knowledge, I did not possess the required skill-set or networks to take the enterprise to the growth phase or scale it up. Hence, though I was a businessman for more than seventeen years, I did not create wealth. But I was fortunate not to be a burden on Indian Tax payers or my family, having repaid all the loans that I had borrowed as promoter-guarantor from various financial institutions and private lenders by the time I exited my business (2001).

Although I registered for Ph.D. at a late stage in my life (at age 52, in 2002) I was quite comfortable to deal with it, for it did not involve strategy or brand building. It was like another start-up experience without financial implications. So also was my experience with social-work; most of the service projects that I worked on involved the Rotary Foundation, which has a well laid-down structure and management system in place.

Unfortunately many of us treat belief, trust, and faith as identical although there are significant differences; this puts everyone at a disadvantage when we communicate. I believe the differences between Belief, Trust and Faith hold great insights about how we act in our professional, business, social, and personal lives. These also include how we manage difficult conversations , how we interpret information, what keeps us motivated, and how we mentor others.

Humans generally believe in the Almighty for the sake of any one or more of the three Ds – to fulfil Desires, to get out of Distress and / or to Detach from senses and relationships. Once the experience continues to be positive, belief turns into devotion over a period of time, which is nothing but faith.

Ethics and Empowerment
Scroll to top